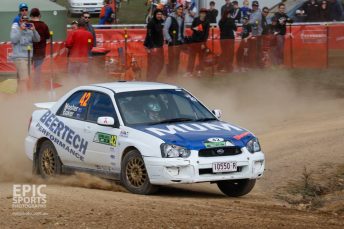 With Mosher returning to competing in the ACT for the first time in over a decade, he dusted off the trusty ex RS Challenge car to take on the turbo cars such as the WRX’s and Evo’s.

The roads in the nations capital are some of the toughest in the country with tight technical plus some fast and flowing sections. The Saturday stages proved tough with some very rough sections really testing the car and crew. The car proved strong with only a few minor issues to sort at the end of day service. The crew ended the day 2nd in the series with 1st in their sights for Sunday.

Sunday dawned overcast with rain expected, stages were slippy and tricky in places with Baker’s local knowledge helping traverse the very bad areas. A last stage puncture slowed the crew down but managed to finish the stage on the remains of the tyre. The team finished with a podium and only beaten by Andrew Penny in a much more powerful Subaru WRX.

In combined event results the team would have been 13th outright which is a formidable result.

The team are now aiming for the Bega rally on the Long Weekend in June. We would like to thank the teams at Beertech Performance and Capital Steering & Supension for all their assistance.