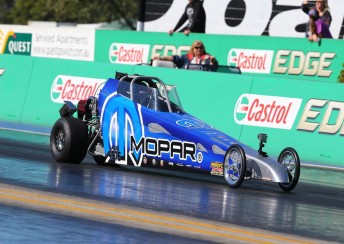 Eden Ward will be part of the Junior Dragster field at this weekend’s Summit Equipment Racing Series at Willowbank Raceway. pic: dragphotos.com.au

Racer support for the event has been high, with 183 racers from all over the country set to take part. Amongst them will be Junior Dragster racer Eden Ward and Top Sportsman racer Daniel Morris.

Sixteen year old Acacia Ridge Skills Tech student Ward has been racing since the age of nine, with the Junior Dragster category taking him all over the country.

“We have competed at one national event so far this season, the Adelaide Pro Series 1000, where I made it to the semi-finals,” said Ward, who thanks his mother Serena and father Ian as well as siblings Obe, Dakota and Maella for their support, alongside Lee Bektash, Fiat Chrysler Group, Team Mopar Australia and VP Racing Fuels.

“It is great to see two national events at Willowbank Raceway, but I am not expecting a home track advantage however, as there are going to be so many local racers taking part. Junior Dragster is a really competitive class and I get to race all over Australia, I love it and I can’t wait to get on-track this weekend.” Daniel Morris and his Holden VQ Statesman will be ontrack at Willowbank Raceway this weekend in the Top Sportsman category. pic: dragphotos.com.au

“The previous round in Adelaide was a bit tricky due to the bitumen surface which caught us out a little bit in the quarter-finals, so we have a few points we need to make-up now,” said Morris, who thanks his father Kevin and crew Tony Menck, Brett Kujawski, James Howe their wives and his wife Kelly for their support.

“We always love racing at our home-track Willowbank, and while I would like to think the home-track advantage will come into play we will have to wait and see. The Top Sportsman bracket seems to be heading in the right direction with strong entry numbers and it should deliver for spectators with great racing from some fast Sedans.

“We had a couple of silly little issues at the start of the year, but since then we have had the engine apart to fix it and we are all ready to get back into it now.”

Tickets are available at the gate for adults at $20.00 and just $18.00 for students and concession card holders with ID, while children aged 13 and under gain free entry.