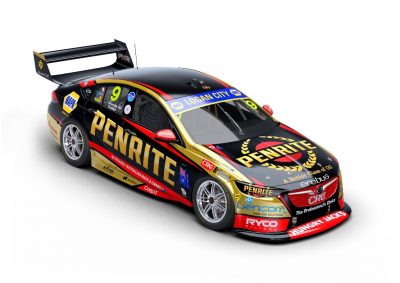 Erebus Penrite Racing has revealed NAPA Logan City are back on board for this weekend’s Gold Coast 600.

The automotive super store backed the team’s #9 entry during selected rounds in 2017, including their victory at Mount Panorama.

Retail Manager Phil Forshaw said the support for the team had been phenomenal.

“What better way to get behind David, Luke and the team than by proudly flying the iconic NAPA brand again at this weekend’s Gold Coast 600.”

David Reynolds and Luke Youlden will sport the same stunning livery seen at Bathurst just two weeks ago, although this time with a twist.

The deal includes NAPA branding on the front windscreen, rear quarter panels and brake ducts of the team’s Holden.

“Last year’s branding on the car drew tremendous support from the intensely proud Logan City community and we want to see that support again,” Forshaw said.

The former arrangement marked GPC Asia Pacific’s launch of their first Australasian NAPA Auto Super Store at Logan City, and the destination continues to be one of Australia’s largest and market leading automotive retail stores.

“We are thrilled to have NAPA Logan City back on board for what you could call their local event,” Erebus Motorsport’s CEO Barry Ryan said.

“It was fantastic to be a part of their launch last year, and it is even better to have them as part of the team again this weekend.”

The Supercars take to the track Friday, with practice starting at 11:40am local time.