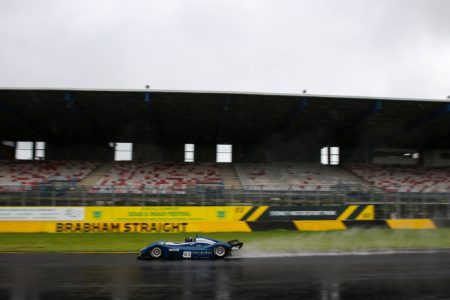 Michael Naguib has had a strong start to 2020, claiming a wet race two win, as well as overall round honours in the opening round of the Australian Prototype Series.

Naguib steered his James Michael Homes West WR1000 to take the chequered flag in Sunday’s race in the pouring rain, having started in fifth.

It was an impressive drive from Naguib, who avoided a number of incidents that shook up the race order.

Jam Motorsport’s John-Paul Drake didn’t see the green flag, with his brakes locking on the formation lap, forcing the field to start behind the safety car as his stricken car was returned to pitlane.

Once Drake’s car was removed from the track, the racing began in earnest.

The Radicals thrive in wet conditions, and unsurprisingly it was Peter Paddon who powered his First Focus Radical to the lead which he held until Naguib took the lead on lap 15.

Yesterday’s race winner Mirage Racing’s Jason Makris wasn’t able to repeat his Saturday feats in the wet conditions, dropping down the order to finish sixth. That consistent performance was enough to see him finish the round in second outright.

Hughes Supercar Services’ Phil Hughes was quick in his new SR8, and while he would go on to finish race two in third, it was a collision with Jam Motorsport’s Mark Laucke that ultimately cost him a chance at the race win.

Laucke lost grip on the slippery track on lap 10, spinning and colliding with Hughes and leaving them both on a rescue mission to salvage valuable points.

Laucke was quick to apologise post-race, with Hughes happy to forgive and forget.

For Naguib, the race win meant the world and ironically, he had even thought about leaving the car parked in the garage due to the wet conditions.

“It doesn’t get any better than that. I was contemplating not going out because I hate (wet racing) so much but I have changed my tune – that was awesome,” Naguib said.

“The first couple of laps I didn’t think it was going to end up like this (with a race win). But I got a bit of confidence and was able to get more grip – I am absolutely stoked.”

Naguib was also the winner of the Hankook Cup Class for the weekend, topping off a terrific weekend for the South Australian.

While today didn’t go exactly to plan for Makris, he was ultimately pleased to finish second overall and start the year off strong.

“It would have been better if it was dry,” Makris said post-race.

“(But) it was good experience in the wet. I haven’t driven the Tornado in these conditions and I nearly pinched it for the win.

“It’s always been a tough one for me. I have got to get more experience in the wet and go forward. “

Paddon finished the round in third overall and was also the fastest of the Radicals.

“I love racing in the wet,” Paddon said.

“I had an awesome start. We went from eighth to first on the first lap, pulled a gap on everyone and got it to 10 seconds before they started to bridge the gap,” Paddon said.

“Finishing third for the round isn’t a bad way to start the year, I’ll take it.”

Teams now have a short break, before the action continues at Winton on 1-3 May as part of the Shannons Motorsport Australia Championships.