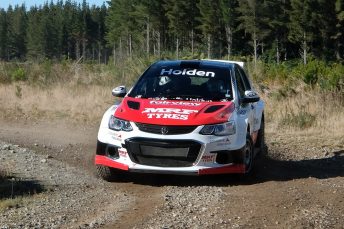 Murphy is understandably disappointed that he’s unable to contest October’s Waikato Rally or November’s Tauranga-based Rally New Zealand due to other commitments, but is pleased to offer this opportunity to Holder and co-driver Jason Farmer.

“I’m not happy that Mark Leonard (Murphy’s co-driver) and I won’t be at the last two rounds, but it’s just the way things played out,” says Hawke’s Bay-based Murphy.

“I’m rapt we can offer this chance for Dave and Jason to drive another AP4+ car. It’s exciting to have the defending NZRC champion driving for the Penny Homes Holden Rally Team. We and our partners who have contributed significantly to the programme to build and develop these two AP4+ Barinas want to see the car in action, so this is great for Dave and for us.”

Holder is also delighted by the opportunity.

“It’s a privilege to be asked by Greg to drive the car,” says Holder who was pleased to finish seventh at Rally Coromandel over the weekend in an older car that he’d worked hard to get ready for the challenging one-day rally.

“I’m looking forward to being back in an AP4 car with Jason. We know the Barinas are still in development and that Josh Marston and the RDL Performance team have been working hard on the cars all season. The Waitomo-based event is going to be a big day where reliability will be the key.”

Holder and Farmer will test with the Penny Homes Holden Rally Team immediately prior to the Waitomo event on 14 October.

Holder’s rally campaigns have been backed by Vehicle Inspection New Zealand (VINZ) for the past two seasons and VINZ CEO Gordon Shaw is happy to see Holder enjoy the chance to get behind the wheel of one of the newest rally cars in New Zealand.

“VINZ has been supporting David Holder for the last couple of years and it is great to see the current New Zealand rally champion get the opportunity to drive in an AP4 car for the last two rounds of the season,” Shaw says. “Thanks to Greg and the Penny Homes Holden Rally Team for giving Dave this great opportunity.”

Follow the team on Facebook via Penny Homes Holden Rally Team or Holder Brothers Racing. Results and news from the New Zealand Rally Championship are available on the website http://chrissport.kiwi/.