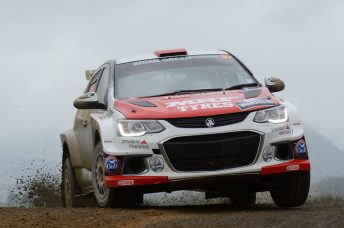 Penny Homes Holden Rally Team drivers Greg Murphy and Josh Marston aim to have both their Holden Barina AP4+ rally cars at the finish of Rally Canterbury, the third round of the 2017 New Zealand Rally Championship running on 4 June around Rangiora.

The team been hard at work since the previous round in Whangarei at the end of April and still has plenty to get done this week as they prepare to test both cars prior to the Autosport Club-run, one-day Canterbury event.

Murphy is keen to get as many kilometres of competitive action as he can. “The number one goal is to be there at the finish. I learnt plenty at Whangarei, but not as much as I hoped because of crashing out on stage seven. I need as many kilometres as possible and feel I haven’t really got started yet.”

The Hawke’s Bay-based Kiwi race star adds: “The crash also means the team at RDL Performance has had to focus on getting repairs done and that’s hurt our ability to look at testing. Huge thanks also to the team at Blackwells Holden Panel Shop who have done fantastic work repairing the front of the car and making the repair job much easier for our guys.”

Christchurch-based Marston is keenly anticipating a new evolution of car setup that the team’s been working on. “The guys at RDL have been flat out, not only with the repairs, but also continuing our development of these brand-new Barinas, particularly with the car setup.”

The team heads out for a test this week prior to tackling 195.15 competitive kilometres around Ashley Forest in their MRF Tyres-shod Barinas. “We have a lot of items which need to be tested to get the best setup,” says Marston.

Both drivers look forward to the north Canterbury rally stages, which get underway around 9am Sunday and conclude in the dark around 6.30pm.

“Despite it being my home rally, I have only driven it four times,” says Marston, who has Gore’s Andrew Graves as his co-driver. “A forest rally like this offers a different challenge from the roads we have seen this year. The main arterial roads are really, really fast which is my favourite part. The night stages definitely add another element to the event and I’m sure will throw up some interesting results. I like the night and it’s a matter of putting trust in your notes and co-driver and committing.”

Murphy, who has Timaru’s Mark Leonard alongside as his co-driver, says: “This will be my third go at Canterbury, so I’m really looking forward to getting on some roads that have some familiarity – I loved it last year. At this stage of my rallying career, it makes a big difference knowing what to expect in the special stages. My first-ever rally stage was the first of the two night stages in 2015 – I was completely out of my depth as I still was nowhere near understanding the driving style required on gravel. I had someone giving me pace notes and the lights weren’t the best on that car, so I did not enjoy it. But last year I absolutely loved the final stage in the dark, so I’m looking forward to it this time.”