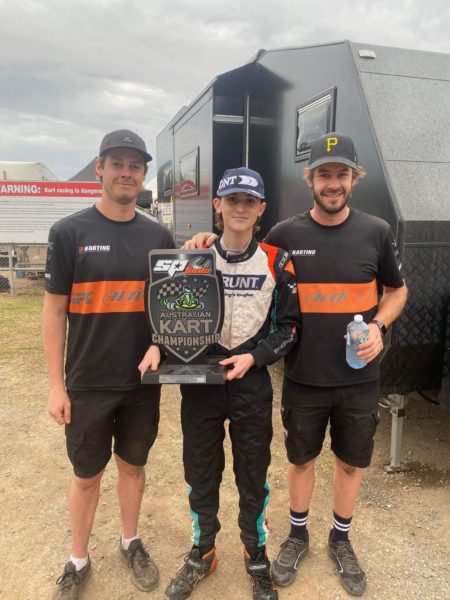 Pro Karting took on the second round of the SP Tools Australian Kart Championship over the weekend in South Australia. With a team of ten drivers across five classes the racing was set to be thick and fast. The team was coming off a strong weekend at the second round of the Victorian Golden Power Series in Bendigo and looking to continue this at the Southern Go Kart Club!

Lucas Costanzo was the sole Pro Karting driver in the over subscribed and highly competitive Cadet 12 class. Lucas qualified inside the top ten in ninth spot in the near fifty kart field. Costanzo finished three of his four heats inside the top ten and had grabbed excellent points for his starting position for the final. After a breakout weekend for Lucas, a DNF in the final brought his weekend to a sad end. The Pro Karting team and Lucas now looked to the next round at his home track to try and continue the strong pace.

Oliver Wickham and his Pro Karting entry took on the highly competitive KA2 premier junior class. In a field of near fifty drivers Wickham qualified just outside the top twenty-five in position twenty-seven. Oliver had mixed results in the heats with two DNF results hurting his chances. A fifth-place finish in heat two had the young driver making the final field in position thirty-five overall. Wickham stormed forward in the final, crossing the line in position eighteen overall moving up seventeen positions!

Tyson Matziamo raced his Pro Karting entry proudly in the TAG 125 Light class. In a near full field of thirty-six karters, Tyson set the tone early by qualifying inside the top twenty in position nineteen overall. A DNF result in heat one hurt Matziamo’s hunt but a fifteen and thirteenth in heat two and three got his weekend back on track. Unfortunately, Tyson’s weekend come to an abrupt end in heat four, with a big incident at turn one ruling him out of the race and the rest of the weekend. Matziamo showed excellent pace and will be a driver to watch this season.

X30 had the most Pro Karting flavour with Kristian Janev, Declan Somers, Will Harper and Ryan Cook all running under the Pro Karting banner. Janev led the way for the team qualifying in third. Somers qualified in position sixteen inside the top twenty with Harper and Cook a bit further back in position thirty-three and thirty-eight overall. Janev had an action packed four heats with a third-place finish, a win, a roll over resulting in a DNF and a win that was then stripped due to restart infringement. Somers and Harper were both able to move forward throughout the heats and make the final grid, but Cook after getting inside the top fifteen in one of his heats was unable to make the final field. Janev unfortunately was involved in a first lap incident taking him out of contention. Somers and Harper were left to fly the flag both coming home inside the top twenty in position nineteen and twenty respectively.

Pro Karting’s Jace Lindstrom spoke post weekend of the team’s results. “It was great to come back to Bolivar and get our first podium of the AKC with Ben Munro in KA4. We worked hard at city of Adelaide titles and all drivers came back stronger this weekend. Having Adam back looking after all our driver coaching has really helped the whole team’s results. It’s really improved the dynamic of the team. To achieve a podium, race wins and fastest laps takes great momentum into this weekend at the Victorian state titles where we will 16 drivers joining us”. Pro Karting will be back on the track this weekend at the Victorian Open State Championships at Eastern Lions Kart Club.