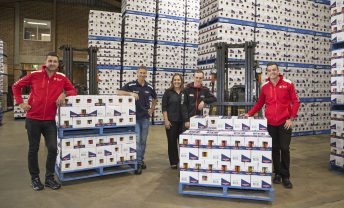 Iconic Australian condiment brand Three Threes and the Shell V-Power Racing Team announced today that they have signed a multi-year agreement to continue their partnership, one that began in 2016.

Three Threes is a brand synonymous with high-quality, Australian-made products and will celebrate its 100th anniversary in 2019. Founded, owned and operated by the McAlpine family since 1919, Three Threes supplies condiments, spreads, pickles, sauces and their famous MightyMite to supermarkets across the country.

Their branding will continue to be displayed across the front splitter and boot lid of both the No.12 and No.17 Shell V-Power Racing Fords of drivers Fabian Coulthard and Scott McLaughlin.

Three Threes Managing Director Michael McAlpine said that the company was proud to continue its support of the Shell V-Power Racing Team.

“Three Threes are proud sponsors of sport in Australia, and our relationship with Shell V-Power Racing Team is one of our proudest,” McAlpine said.

“Now in our second season of partnership with this famous team, it’s been extremely satisfying to be rewarded with the success we’ve seen this year.

“We’re also leveraging our partnership, and are currently running a promotion to win a trip for two lucky people to join the Team Penske NASCAR team at the 2018 Daytona 500. Opportunities such as these are invaluable, and a fantastic part of the relationship with this team.”

Shell V-Power Racing Team co-owner and Australian sporting icon Dick Johnson said that the relationship between the two companies is built on a shared history of family ownership and respect.

“I’m extremely proud of the history of our team in the Australian motorsport industry, and even prouder when we’re able to partner with and promote great Australian companies like Three Threes,” said Johnson.

“Three Threes is one of our strongest partnerships, and to be able to repay their trust and support with success this year is very gratifying.

“We are very much looking forward to celebrating Three Threes 100th anniversary with them in 2019, and to winning more races with their support.”

The Shell V-Power Racing Team will next appear at the Wilson Security Sandown 500 across the weekend of September 15-17, the first round of the Pirtek Enduro Cup.

Three Threes is an Australian family owned food manufacturing business that was first registered in 1919, by Stanley Roy McAlpine. Three Threes is currently managed Michael McAlpine, the 4th Generation of The McAlpine family, his wife Justine and their son Timothy – now the 5th generation of family involvement. Three Threes proudly supply and manufacture a quality range of products, including condiments; spreads; pickled vegetables, sauces and their famous MightyMite to Australian supermarkets.

DJR Team Penske is one of the most successful motorsports teams in Australia, with seven Australian Touring Car / Supercars Championships and three Bathurst 1000 victories. With the backing of the iconic Shell brand, the team will be known as the Shell V-Power Racing Team in 2017. Team Penske’s U.S. motorsports entities are among the most successful teams in the history of professional sports. Competing in a variety of disciplines, including NASCAR and INDYCAR, the team has produced more than 468 major race wins, over 530 pole positions, 29 National Championships and 16 Indianapolis 500 victories in its storied history.