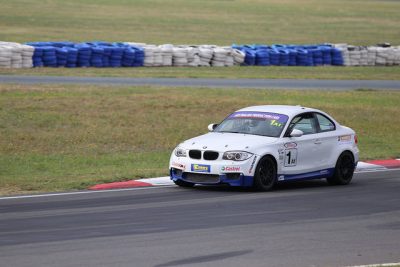 Muller Motorsport is set to step up to national-level competition in 2018, fielding the ex-Beric Lynton 2016 championship-winning BMW M1 in the 2018 Australian Production Cars championship.

“We chose the APC as we felt it fit perfectly with our goal of advancing on our success of 2017 in the NSW Production Touring Cars while moving to the national level,” explained team director Urs Muller.

“The APC is a great competitive category and has an excellent grid of drivers and cars. The most convincing factor for us however, was the number of endurance rounds – our team loves the thrill of endurance racing and thrives on its challenges.

“Our main goal for this season is to have a clean finish for every round, dip our toes into the national series game and learn as much as we can to hopefully return fiercely competitive in 2019.”

The team will field the 2016 APC championship-winning Class A1 BMW 1M which was previously owned and driven by Beric Lynton. It will be sponsored by Dynamite Electrical and supported by OPT Traffic and Mainpoint Advisory.

Steering the entry will be 18-year-old Sydneysider Tom Muller, alongside co-driver Shane Smollen.

Muller’s racing history includes third overall in his debut racing year in the 2016 X3 NSW Excel Series. He competed in the Aussie Driver Search in the same year before 2017 saw him graduate to the NSW Production Cars while taking out second outright in Ipswich’s Dancing in the Dark Enduro.

“There are some extremely fast and talented drivers and cars in the A1 group this year which will certainly prove challenging, just how we like it!” Tom Muller said.

“As far as Sandown goes, we have never competed there as a team, so we hope to adapt as quickly as possible for the best result. We will be tackling the Bathurst Six Hour together first, which should be a good indicator for us as to where we will stack up against the others in our class for Australian Production Cars.

“We are eager to get the season started and are counting down the days until Round One. With the Bathurst Six Hour looming, Sandown is sure to creep up on us, but our goal has always been to get ourselves there, work hard and have a good result.”

Muller Motorsport won’t be flying solo when they make their APC debut either, teaming up to fly under the wing of Fierce Racing in 2018 as one half of a two-car outfit.

“The two-car operation is being managed and sponsored by On Track Motorsport thanks to Garry Mennell and this has really been a very exciting time for the whole Muller Motorsport team,” Urs explained.

“There is more info to come on this, so stay tuned!”