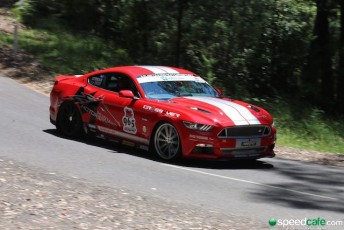 MEDIA RELEASE: More than 50 classic and modern cars will fire up at one of Victoria’s most popular ski resorts this weekend, as the first round of the 2016 Australian Tarmac Rally Championship kicks off.

Competitors are coming from every state in Australia for the Mt Baw Baw Sprint, which takes over the resort from this Friday, February 19, until late afternoon on Sunday, February 21.

The cars will be checked for competition readiness at the Resort on Friday afternoon before two days of rallying using the access road from Icy Creek to the Resort car park.

Closed to public use while the competitors are in action, the road is broken up into a series of individual ‘special stages’ run both up and down the mountain for a total of 220km of competition.

The final stage is a 30km ‘blast’ over the full distance of the road to the village.

With support from Mt Baw Baw Resort, this is the fifth year the event has been run and event director Peter Washington says the fact competitors are coming from so far afield proves what a drawcard the event is.

“Anyone who uses that road on a regular basis knows how challenging it is, especially when there is traffic going both ways.

“To be able to close it and use the whole road is an amazing experience for our entrants who are licensed to drive at high speed. We love coming to Mt Baw Baw and we’re thrilled the Resort is welcoming us again. It’s a fantastic start to our series.”

The 2015 series finished with the Snowy Mountain Sprint near Lakes Entrance over the weekend of December 5-6. The event victory and outright series win went to Melbourne Ford Mustang specialist Craig Dean in a 2015 Shelby GT Mustang.

The outright classic title for the year went to Canberra’s Laurie Burton and his 1976 Datsun 260Z.

The defending champions are among the 56 entrants taking part this weekend. Most will be in modern or classic vehicles, set up as full rally cars with roll cages and other mandatory safety equipment.

However, drivers who don’t have competition cars can use their own everyday vehicle to ‘taste-test’ the event, in the touring category.

They get to run the same stages of the event under closed road conditions at speeds up to 130kmh. There is also the regularity, or average speed category, where crews have to manage their speed across the course, or risk being penalized if they are too fast or too slow.

The Australian Tarmac Rally Championship series is made up of four events, all run on public roads that are closed to general public use while the rallies are run, although breaks are made in the timetable for public access if necessary.

After Mt Baw Baw, the next event in the series is the Lake Mountain Sprint, based at Marysville over the weekend of May 28-29. There is a pause over winter, before the Snowy River Sprint (Lakes Entrance) in September and the Great Tarmac Rally (also at Marysville) in December.

Melbourne-based motorsport events company, Mountain Motorsports, which has run more than 40 tarmac rallies and touring road events since 1995, manages the Mt Baw Baw Sprint and other events in the series. Further information is available from the series website: http://www.australiantarmacrally.com/