MSC races and record to Smith, Series title to Ross

MSC races and record to Smith, Series title to Ross 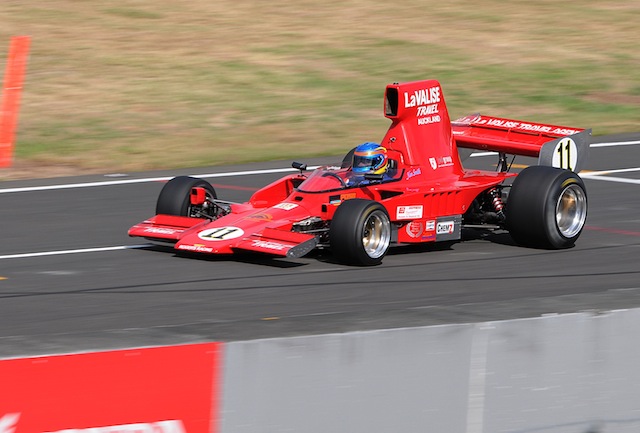 Ken Smith (Lola T332 #11) on his way to one of his three MSC NZ F5000 series race victories at the NZGP meeting at Manfeild. pic: Fast Company/Lyall Chinnery

For three-time former series title holder Smith, 73, from Auckland, it was a new category lap record and his third round clean-sweep of the season. For southern man Ross, a relative youngster compared with Smith at just 58 years of age, it was winning the MSC F5000 series for a third time.

“Not a bad result, was it?,” Smith said as he was surrounded by well-wishers after winning the feature race MSC race, held just before the 60th annual NZGP, a race won by Canadian Lance Stroll, a mere 57 years his junior.

A three-time winner of the New Zealand Grand Prix himself, Smith arrived at the meeting keen to further lower the F5000 category lap record – 1.01.770 – he set two years ago.

He and Ross both lapped under it in qualifying on Saturday morning but only Smith was able to beat it in a race, Smith winning the second eight lap prelim on Sunday morning with a best lap time of 1.01.629.

Ross got the jump on Smith off the rolling start of that race – after Smith admitting baulking a gear change – but the Dunedin man only managed one lap in the lead before Smith made up the deficit, scythed past and started pulling away.

With Smith only contesting three of the six rounds of this season’s trans-Tasman series, he was never in the running for a fourth series title, however.

Ross did do every round and after a dominant performances of his own – in Smith’s absence – at the penultimate series round at the Skope Classic meeting in Christchurch last weekend, a record-equalling third MSC title was his for the taking before his McRae GM1 even turned a wheel this weekend. 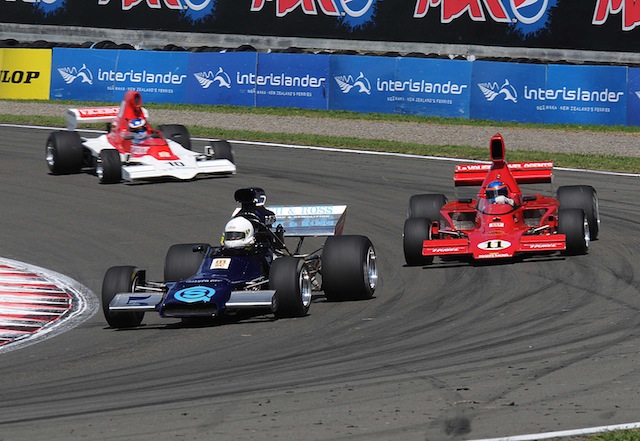 Despite that Ross showed in qualifying, where he was the only other driver outside Smith to break the 1.02.000 barrier, that he was going to fight for every point, and fight he did, grabbing the lead in the morning race, then being forced to work his way back up through the field after an early passing move in the 12-lap final went wrong.

“We’ve always raced to win championships,” the New Zealand Pre- 65, Osca and TranZam class title holder said as he helped pack his car for the return trip south. “In an ideal world you win races too, but Kenny’s a hard fellow to beat anywhere, and when he’s on his favourite circuit he was obviously hot to trot, but you know, we gave it a good go!

For the record, Ross’s brand of speed, consistency and commitment to do all six rounds of this season’s MSC series saw him add the 2014/15 title to those he won in 2011/12 and 2012/13 with a final score of 764 points, 271 more than Russell Greer from Blenheim in his ex-Graeme Lawrence Lola T332 (493) and 335 more than third placed Greg Thornton in his freshly rebuilt ex Sam Posey Surtees TS11.

Greer, who stepped up to contest the MSC series after an early career rallying and later interest in historic racing, was ‘over the moon’ with second in the series points standings, paying tribute to Christchurch preparation specialist John Crawford and his team from Motorsport Solutions who have run the car for Greer this season.

“I’ve actually more than achieved my goal. I set out to try and get a good result but never dreamed I’d get up to second. I got quite a few good results this season but really the main thing was being consistent.”

Greg Thornton was also well pleased with third place in the series points standings, having rebuilt his ex-Sam Posey Surtees TS11 from the ground up after it was badly damaged in a workshop fire two years ago, and made the commitment to commute back and forward from his base at Stansted Airport north of London to rounds of the MSC series here and in Australia.

“I’m really pleased about finishing third in the series,” he said. “It (the Surtees) is such a brilliant car. It’s one of the earlier ones, built as an F1 car in 1970 then converted to F5000 spec in 1971. The engine’s solid rather than quick but it’s very good under brakes and very nimble in the wiggly stuff, so it’s been very good here.”

Also looking strong was one of the MSC series’ originals, Shayne Windleburn who, after sorting a brake issue with his Lola T400 on Saturday night, spent both races moving forward today. ending up 10th in the race in the morning and ninth in the feature in the afternoon.

With the MSC NZ F5000 Tasman Cup Revival Series over for another year, the series regulars are looking forward to joining their American counterparts at the annual Rolex Monterey Reunion historic and classic motor racing meeting at Laguna Seca in northern California between August 12 and 16 this year.

Some members of the local association will also me competing at meetings in Australia next month.