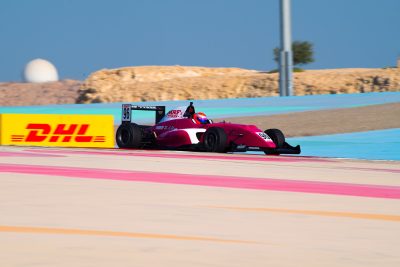 Young Australian driver Kurt Hill wrapped up his first MRF Challenge series in positive style at the Madras Motor Race Track in Chennai this weekend, taking forward many positive lessons into the new season of racing.

“Overall the Chennai event went really well. We had a bit of a tricky start finding our way on the very tight, twisty and bumpy track. But in the end, we found some good, strong lap times and I’m pleased with where I finished up. So, all in all it was a good weekend,” explained Hill.

The 21-year-old, who made an impressive debut in Formula Masters last year, has been keen to continue his development as a driver over the winter months. Finding the MRF Challenge a perfect outlet to learn and gain vital on track expereince, something he felt showed in the series finale this weekend.

“In each race it felt like I capitalised on what I had, more so than in any other race weekend I’ve done. The stand out moment for me was race one, where I found bucket loads of time, and ran very consistently throughout the race. My lap times were all within a few tenths of each other, so I’m really happy with that.”

Former speed skater Hill, had never raced on the 3.717km/2.310mi Madras Motor Race Track previously, and found it quite different to the other circuits the series had raced on previously.

“The Chennai track was extremely bumpy and dusty compared to where we have raced before. It didn’t really affect how I drive though, because what you’re trying to achieve doesn’t change that much from track to track. The biggest difference was how dusty it was off line, so if you ran wide it was like hitting ice.”

The Sydney born racer has thoroughly enjoyed his time driving in the Formula 3 style MRF Challenge and is taking away a lot of new lessons into his future career. “This series has allowed me to learn so much. I’ve learned how to work in a different environment, with new people, building up the communication so we can all achieve what we want. It’s also helped me a lot learning to compete against driver in another level of experience, stepping up from where I have been. That’s going to be the biggest thing I take forward with me to the new season, my ability to race wheel to wheel with other cars and get the result I want.”

Hill is now looking forward to the 2018 season, preparing for his first race in Asian Formula Renault. The six-race series begins at Zhuhai on March 17-18.

Like any dedicated, top athlete, Kurt Hill is massively appreciative of his family, and the team around him, who help him to chase his goals. “I’d like thank my parents especially for allowing me to take up this opportunity to race in MRF. They’ve supported me all the way, right through go-karts to now, and they continue to support me which absolutely great. I’d also like to thank Dave Diggle from the Smart Mind Institute. He’s given me the tools I need to perform consistently, and learn, grow and keep moving forwards in the racing world.”

Round 5&6 May 26-27 Ningbo International Circuit