Mr Superbike on board for another ASBK ambassador year

Mr Superbike on board for another ASBK ambassador year 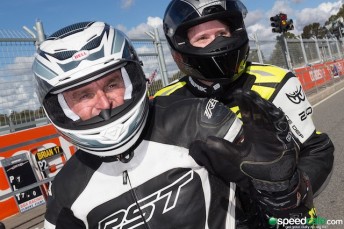 MEDIA RELEASE: A man who was known throughout his career as Mr Superbike, Robbie Phillis has extended his experience and knowledge to the ASBK, joining the ambassador team for the 2016 Yamaha Motor Finance Australian Superbike Championship presented by Motul Pirelli.

Phillis, who has had a long and successful career aboard his many superbike machines, is also a legend in our own Australian Superbike Championship taking out the title on multiple occasions throughout his career.

Known for his comedic and fun personality Phillis was delighted to be able to make comment in light of the recent announcement, showing his gratitude towards the sport and his excitement in being named ASBK ambassador once again.

“It’s something really special. My club has made me a life member last year, which is an honour. We have had to earn our position here, to be able to be an ambassador,” he said.

“To be able to help young competitors is great, hopefully I can make it fun and offer encouragement. All I have ever wanted is to be able to help people and this is a great way to fulfil that.

“I think it’s important to give back to the sport that has helped not only me on my journey but also helped my son Alex. There are so many people who have helped us along the way and that is why I wanted to help. It’s like being part of a big family.”

To be able to have a legend like Phillis on board for another year as an ASBK ambassador is fantastic, especially heading Round 1 of the ASBK at Phillip Island this weekend.

Continuing his involvement with the ASBK pillion program, joining the other ambassadors in taking around lucky spectators and VIP’s on a ride of a life-time at selected tracks through Australia.

The Yamaha Motor Finance ASBK Championship presented by Motul Pirelli will continue to announce exciting developments for this year in the coming weeks.

For more information on the championship series please head to www.asbk.com.au or our ASBK Facebook page.