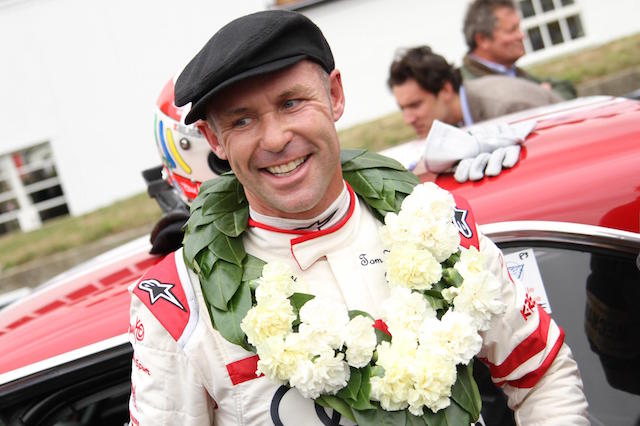 MEDIA RELEASE: The most successful driver in the history of the Le Mans 24 Hours, Tom Kristensen, will return to the Goodwood Revival for the first time in two years on September 11-13, and will be joined by at least six other winners of the classic French endurance race as part of a sensational driver line-up.

Kristensen, 48, took a record nine victories at Le Mans between 1997 and 2013, and is already a winner at the Revival, having taken victory in the RAC Tourist Trophy Celebration race in 2011 in a Shelby Cobra Daytona shared with Indianapolis 500 winner Kenny Brack.

This year he is aiming for a second TT victory in the race featuring over £150million worth of closed-top GT cars from 1960-64 and will be behind the wheel of the unique 1963 Lister Coupe formerly raced by touring car legend Anthony Reid at Goodwood.

Joining the Dane will be at least six other legendary sportscar drivers who can list 10 more Le Mans victories between them.

Italian Emanuele Pirro, a five-time Le Mans victor and a race winner at the 2008 Revival in an Austin Healey 100S, is another to confirm his participation at the Revival and is set to race in both GT cars and saloons.

Richard Attwood, who kicked off Porsche’s record run of Le Mans victories in 1970 in the legendary Salzburg 917K, also returns.

Attwood is one of the Revival’s most successful competitors, the F1 podium finisher having won eight races at the event in single-seater and GT machinery, most recently behind the wheel of a BRM P261 in the 2010 Glover Trophy.

Jackie Oliver, whose win at La Sarthe came a year before Attwood’s, sharing a Ford GT40 with Jacky Ickx in what remains the closest competitive finish in Le Mans history, has also tasted victory at the Revival – in the St Mary’s Trophy in 2011 in a BMW 1800TiSA – and returns for another crack at success.

Three winners from the Group C era will also join the fray, with Revival regulars Andy Wallace, Jochen Mass and Mark Blundell, Le Mans winners in 1988, ’89 and ’92 respectively, all set to race in the St Mary’s Trophy for 1960s production saloons such as the diminutive Mini Cooper S and the giant Ford Galaxie.

Many more legendary drivers and riders of past and present will be announced between now and the Revival itself, with Formula 1, Indycar, sportscar, touring car, MotoGP, Superbike and road racing all set to be represented.