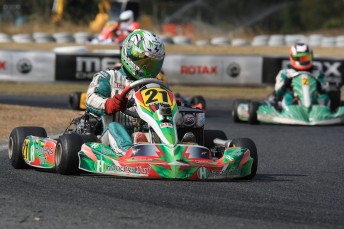 Victorian duo Brenton Mountjoy and Troy Woolston have taken victory in their respective classes in the Pro Tour Finals at Coffs Harbour.

In doing so they have subsequently ensured the fight is still very much alive for the 12 Team Australia seat allocations up for grabs for the Rotax Grand Finals in Spain, set to be decided at the Rotax Nationals in Ipswich in September.

Sydney’s Adam Hunter continued his impressive race form in Sunday morning’s pre-final, taking victory in DD2 Masters and continuing his trend of race wins for the weekend. Hunter remained unbeaten following his pole position and heat race successes on Saturday, while Queensland’s Klinton Hancey progressed forward to take second with the pair to set to make it an all Tony Kart front row for the final. 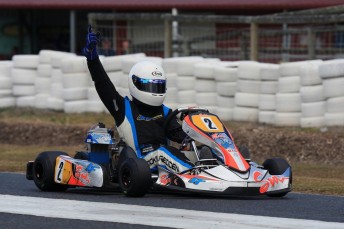 After his successful results throughout the weekend, Adam Hunter looked as though he would take out victory in the final before a mechanical drama ended the Tony Kart driver’s race early.

Hunter’s strong form throughout the season still holds him in a firm position to form part of Team Australia for the Rotax Grand Finals in November.

Klinton Hancey’s consistent race pace throughout Sunday’s two events was rewarded as he drove through to take the win, sharing the podium with Lee Adams and Hamish Leighton.

Tony Bregonje and Danny Wright managed to secure the final placing’s inside the top five.

“It was a good weekend for us, in particular in the pre-final and final. Adam (Hunter) definitely had the pace throughout the races but I was happy that we were able to keep a consistent flow with our times which helped us in our overall position. I’m really excited to come away with the win and look forward to getting to Ipswich for the Nationals,” Hancey said.

On the back of his two heat race wins in Saturday’s events, Karting World driver Glen Ormerod stepped up to finish on top in the Sodi Junior Max Trophy Class pre-final.

Ormerod was engaged in a strong battle throughout the race with West Australian Brooke Redden that saw the pair exchange fastest lap times throughout the 20 lap event.

The battle between Glen Ormerod and Brooke Redden returned in the final with the pair again fighting for fastest lap times with both drivers sharing the time at the front.

Redden was able to move to the lead throughout the race, securing a comfortable gap over the Sydney driver as he eventually went on to take the win and extend his lead in the series standings.

“I had a good weekend overall and it was a great battle with Glen (Ormerod) for much of the weekend, the win really helps me not only with the points but with my own confidence behind the wheel and I can’t wait to get to Ipswich and hunt down a podium or even a win at the Nationals,”
Redden said. 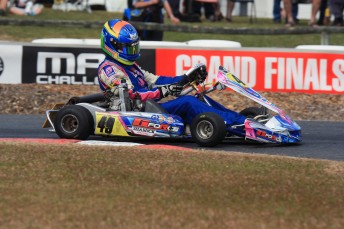 The Rotax Light finals saw a Victorian domination as G-Force Karting driver Brenton Mountjoy stepped up to take the win in the pre-final on the back of his two second place finishes in the heat races on Saturday.

Mountjoy’s result ensured he would start on the front row in the critical 24 lap final, hoping that he could gain another strong jump away from the line and look towards standing on the top step of the podium.

Praga’s Jordan Boys showed why he remains a chance to be part of the Rotax Grand Finals team in Rotax Light as the 16 year-old took second behind Mountjoy while Nicholas Andrews capitalised on his pre-final pole position to finish third.

Andrew Carey made it three Victorians inside the top four as he took fourth while Dean O’Brien finished fifth and New Zealand’s Daniel Kinsman sixth.

Another strong start for Brenton Mountjoy saw him skip away to the lead early on as the battle for second through to sixth ensured the Kosmic driver was able to develop a lead that would eventually see him take the race and round win.

Jordan Boys was able to lead the first battle pack as he took his place on the podium alongside Mountjoy with Andrew Carey making it an all Victorian podium.

Brad Jenner managed to finish fourth, helping him to increase his lead in the rankings with Daniel Kinsman taking fifth and Nicholas Andrews sixth.

“I’m really excited to get the win especially being so close to the Nationals; I had a great event at Puckapunyal last year to get pole position so I’m hoping my form will help me to be in a similar position at Ipswich. The racing was close all weekend and I’m sure it will be much the same in a few weeks’ time,” Mountjoy said. 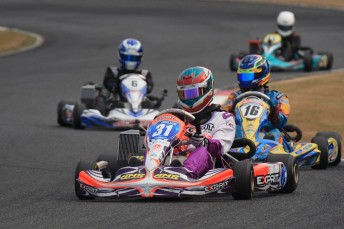 Sydney’s Jayden Ojeda was able to all but confirm his first appearance at the Rotax Grand Finals in November as the Exprit driver continued his successful weekend, taking the win in the pre-final in Junior Max.

The front row for the final would be a mirror from the pre-final as fellow Sydney driver Isaac Vaccarella took second, while Bryce Fullwood took a strong bank of points, finishing third and setting up a second row start for the final. Victorian Aaron Cameron remained on a charge as he took his Formula K kart to fourth, while West Australian Jake Kostecki finished inside the top five with New Zealand’s Dylan Drysdale taking sixth in just second appearance in the Pro Tour.

The dominance of Ojeda continued into the final, though a strong start from Isaac Vaccarella saw him take the lead from the outset.

A pass for the lead approaching the midway point of the race allowed Jayden to open up a lead that extended to almost a second by the completion of the race.

The victory handed him a clean sweep of wins across the weekend, while Redspeed’s Vaccarella took second with Aaron Cameron making it two podium finishes in two race meetings securing third.

Despite his strong form throughout the heats and into the pre-final, a terminal engine problem for Bryce Fullwood ended his race early, opening up the battle for the Rotax rankings with one event remaining in the season.

“It was a perfect weekend for us, we got the setup right on Friday during practice and that translated through to a successful day on Saturday. I had a great battle with Isaac (Vaccarella) in the finals but I was really happy to be able to drive through to a race win. It sets us up really well for our attack on the Nationals and also the Grand Finals in Valencia,” Ojeda said. 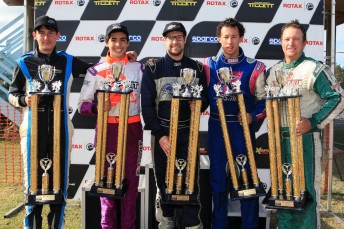 A blistering start from Bundaberg’s Mason Barbera in the DD2 pre-final saw him take a significant lead from the beginning as he appeared unstoppable taking his first race win in the gearbox class.

Birel’s James Macken backed up from his successful Saturday to finish second behind Barbera, leading home a close pack of drivers including Victorian Troy Woolston who finished third and LH Kart driver Lucas Ward in fourth. Rankings points leader Jason Pringle fought back from a tough Saturday which included two DNF results to finish fifth with Jordan Boys in sixth.

The DD2 final appeared to be battle for many as the experience of Troy Woolston shone through as he took the race win in stunning form, continually resetting the fastest lap of the race into the closing stages of the event.

Woolston’s pace ensured he opened up a comfortable lead over eventual second place finisher Mason Barbera who achieved his first ever Rotax Pro Tour podium while Jason Pringle improved his results further to complete the podium in third.

New Zealand’s Josh Drysdale also displayed a regular ability to be amongst the fastest on track as he took fourth on debut in DD2 with Lucas Ward finishing fifth and Jordan Boys sixth.

“We were definitely on the pace right throughout the final and to have that speed so late in the race is a true testament to the hard work put in by team so I can’t thank them enough.

It really helps my points and my chances of getting another Rotax Grand Finals appearance significantly getting a win this late in the season.

I now have to turn my attention to the Nationals where I need another good result to finish the job and join Team Australia in Spain,” Woolston said.

The 2014 Rotax Nationals take place at the Ipswich International Karting Circuit, Ipswich, QLD from September 4-7 under a day/night format.