Motorsport fans from the top end of Gippsland just have to be at Bairnsdale Speedway on Saturday night, twenty plus Sprintcars will do battle to try and take victory in the ‘Dwyer’s Toyota’ Victorian Speedway Council Sprintcar title and the defending champion formerly a Bairnsdale racer and now a fly in fly out competitor from Western Australia Mark Noonan, is back to defend his title won last season. 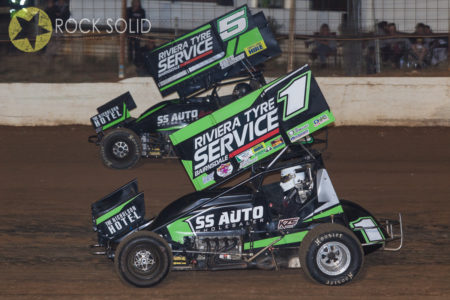 In Sprintcar Action Noonan will need to hold of a list of stars including his teammate Shane Steenholdt who has found victory lane on a regular basis this season. Steenholdt starts as a slight favourite on actual results this season, however Dennis Jones returns to competition having been competing in the Sprintcar Racing Association series. Adam Greenwood whose been challenging Steenholdt recently, Alistair Bastian, Justin Barton, Chris Rodda and Bairnsdale club President Mark Laity are others that immediately come to mind as potential winners.

Steenholdt has won Bairnsdale races and Ballarat races significantly this season despite the pressure that Bastian and Greenwood have applied to him. Justin Barton almost stole victory from Steenholdt at one meeting in Ballarat, however Steenholdt found a way to win.

In Chevrolet LS3 Sprintcar racing at Bairnsdale high 13 and low to mid 14 second laps are possible at Bairnsdale where drivers drop down out of turn two and down the back straight and climb up through turn three and four. Locals are right in the mix on Saturday night.

The Unlimited Sedans visit two weeks after their own Victorian title and the top three from that event in Drouin are coming. Warrick Taylor, Lennie Bonnici and Daryl Nicolson lead the contingent that is coming that includes the very fast Sean Lister, Johnny Young and Steve Hodder. A mixture of engine sizes and chassis types should interest fans as they watch something new. Taylor starts as the favourite in this one after retaining his status as class champion in the class state title. Taylor competes in a chassis that was for Late Model Sedans, Bonnici a Super Sedan Chassis and Nicolson a AMCA National chassis just to paint the picture.

In a Ladies Open Sedan feature Gemma Laidlaw leads a field that includes state Standard Saloon Ladies Victorian champion Trish Dike. Dike has gone back to back with title wins in her class, however Laidlaw drives a different machine. It will be interesting to pit the skills of both against one another; however Mel Tatterson is another racer they should both watch out for. Tatterson is very competitive in the Division 2 Hot Rod class where she has been the only woman racing, this will be an interesting experience for her. Emily Ayre has had a competitive season and Kate Stuchbery is coming off a win at Drouin. The Ladies event is looking like a tough race to pick.

A last minute opportunity for Standard Saloons to go racing has seen a handful of competitors nominate for the “Great Southern Kitchens 600’ including the man that has won all three other events this season at Bairnsdale, Joshua Thomas. Thomas will need do battle with Jacob Vuillermin and the returning Rhys Lansdown whom is last year’s Junior Standard Saloon champion.

Limited Sportsman will compete in the Bairnsdale 500 for their class with Dillon Seily getting a start in the David Dennison owned machine. Jason Hurley, Katelyn Worthy and Bowen Donkers are all competitors to watch in this race, Donkers all the way from Portland should give Seily a bit of a hurry up on their way to a potential race victory.
Race day enquiries only please contact this number 0458 617 910

Action begins at 5.30pm with public entry open from 1pm.