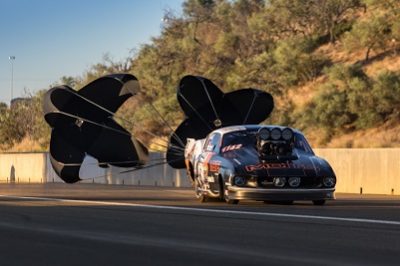 Paul Mouhayet has struck his biggest blow yet in the 400 Thunder Pro Slammer Championship, defeating multi-time Australian champion John Zappia in a thrilling final round of the MacTrack Westernationals at Perth Motorplex on Sunday.

After top qualifying and setting a new national speed record on Saturday in the Komatsu/Mack/Moits Racing Ford Mustang, Sydney’s Mouhayet returned to dominate eliminations with a 5.709 second defeat of Ryan Moresby in round one, a 5.674 to knock out the USA’s Frankie Taylor in the semi finals and then a 5.660 against Zappia’s 5.809 in the final.

Mouhayet said it was a massive reward for the team following weeks of preparation.

“You have to do a lot to prepare for this road trip, it is a big drive and we are all away from work for the week so the boys are really happy,” he said.

“John comes over to Sydney and whips our butts most of the time, so we enjoyed coming to Perth Motorplex and having a good weekend.”

The team’s busy lead up included pre-event testing, which Mouhayet said was vital to reaching the winner’s circle.

“Testing certainly helped because we made some changes on the car suspension wise and it fixed all the problems we had with tyre shake on our first few test runs,” he said.

“Then we were trying to set ourselves up for today with our qualifying runs and we pulled it off.”

Victory gave Mouhayet a 40 point lead over Zappia in the championship with three rounds remaining.

The next round of the 400 Thunder Professional Drag Racing Series for the Pro Slammers will be Southern Thunder at Adelaide International Raceway on March 23 and 24, where Mouhayet hopes he can extend his points lead even further.

“We tore some diff centres up this week so we have to regroup and make sure everything is good then get ready to head to Adelaide,” he said.

Like Pro Slammer, Top Bike came down to the two top qualifiers in the final round as Queensland’s Chris Matheson took on WA’s Mark Drew.

Matheson had a lucky break in round one when he broke a drive belt, only to then watch opponent Les Holden cross the centre line, resulting in disqualification.

“Because we smoked the tyre earlier in the day we were nervous about putting power in the bike at the startline, but we got through,” he said.

“It dropped a couple of cylinder early in the pass so the incremental times were not as strong as they could have been, but it is a good result.

“Getting through the first round was pure lucky. We haven’t broken a primary drive belt for a long time and we were dead in the water. I was watching Les and I thought, ‘wow, he is going to have to hang on to this.’ To our luck he crossed the centre line.”

The 400 Thunder Top Bikes next head to Willowbank Raceway on Good Friday and Matheson is looking forward to returning to his home track.

“If the track is good we can put some power in it and see how we go, we have way more power than we can use early in the run right now.”

The round of the 400 Thunder Professional Series will be “Southern Thunder” at Adelaide International Raceway on Friday 23rd and Saturday 24th March 2018 featuring Pro Slammer, Pro Stock and Pro Bike categories.