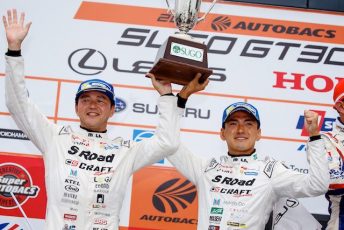 Despite qualifying last in the GT500 pack, Chiyo, aboard the No.46 GT-R, and Ronnie Quintarelli—who also struggled in qualifying—began a charge through the pack at the green flag.

After two laps, Chiyo had jumped up to 8th behind Quintarelli. A series of safety car periods mid-race jumbled the pack, with Chiyo being able to swap to the team’s second driver, Motoyama, before many of their rivals. When the race restarted after the third safety car, the top four cars immediately pitted, including Quintarelli.

This promoted Motoyama to second, and a dramatic battle continued to the flag. With rain falling on the final lap, both cars ran off course and made contact with only a few corners to go.

The Mola No.46 crossed the line in second place with Quintarelli and Tsugio Matsuda finishing fourth.

“In the warm up before the race the tyres were feeling good and they matched the road surface even better than we expected,” Motoyama said.

“Even after the rain let up, if you veered away from the race line the course was still not dry, which made overtaking very difficult. I just wanted to avoid the risks of making contact, and so, in the end, I held back slightly.

Hironobu Yasuda and Jann Mardenborough finished 11th after a daring strategy of starting on slick tyres hampered their progress.

Daiki Sasaki and JP de Oliveira also gambled on slicks in the damp conditions and suffered a crash.

“I didn’t get to race at Spa last year, so I am really looking forward to heading back for this year’s race,” Chiyo said.

“There is no doubt it is one of the greatest tracks in the world and the level of competition with well over 50 cars is going to be intense.

“I’m heading there after a great Super GT weekend where Motoyama-san and I finished on the podium in second place.

“I’d certainly love to get up on the podium at Spa as well.

“Lucas, Alex and I had a really good run at Paul Ricard and the car was really strong at the Spa test day so I’m looking forward to the weekend.”

Mont-Tremblant, ON, Canada – Nissan Micra Cup battles continued at Mont-Tremblant in Canada last weekend with Xavier Coupal, the series’ 2016 champion, victorious in Saturday’s race and Kevin King, the championship leader, taking his first win of the season on Sunday.

Starting on pole position on Saturday, Coupal built up an immense lead until a caution period less than ten minutes before the end of the race. The race finished with an exciting battle for second place, between King, Olivier Bédard and Jean-Michel Isabelle. King managed to hold off the challengers, with Bédard rounding out the podium.

Coupal was again on pole for Sunday and he, Jean-Michel Isabelle, Olivier Bédard and Kevin King fought for victory for the entire race.

Once in the lead, King overcame the pressure put on by his competitors and pulled off the win. This increased his lead in the championship standings ahead of Bédard, Coupal and Isabelle, who finished second, third and fourth respectively.

For their next outing, the Nissan Micra Cup will remain in Quebec, but this time as part of the popular Grand Prix de Trois-Rivières taking place from August 11 to 13.