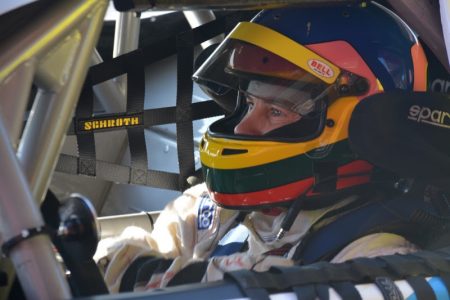 One of the biggest stars in motorsports choose the official NASCAR European Championship for his return to competition. Formula One World Champion, Indy 500 winner and CART Champion Jacques Villeneuve will compete full time in Euro NASCAR with Go Fas Racing in a 2019 season that is already shaping up as the most anticipated in the European NASCAR series’ history.

Villeneuve participated in 2 days of testing on December 13-14 at the Autodromo di Franciacorta in Italy to discover the Euro NASCAR car and gain some valuable experience on the track that will host the second round of the 2019 season.

“I had a lot of fun discovering the car because it is really similar to what I was used to in NASCAR in the US. You can really drive it hard and you can work a lot on the car and that is also very nice. I also like the track, it’s interesting and there’s a lot to do for the driver,” said the Canadian. “Returning full-time is what matters the most to me, because I want to be part of a complete project and have a goal for the entire season. I’m really looking forward to the first race of 2019!”

A true icon of motorsports and one of the most eclectic drivers of the modern era, Jacques Villeneuve won the 1997 Formula 1 World Championship, the 1995 Indianapolis 500, the 1995 Indy Car World Series and finished second in the 24 Hours of Le Mans. He also competed in all three NASCAR’s major National Series and in the NASCAR Pinty’s Series in Canada.

Villeneuve will become the first Formula 1 World Champion to compete full-time in Euro NASCAR, further cementing the championship’s status as one of the best touring car series in Europe.

“Having Jacques aboard is a huge piece of news for everybody involved in Euro NASCAR : our fans, partners, teams and drivers!!” said NASCAR Whelen Euro Series President-CEO Jerome Galpin. “The series continue to grow and to gather everybody having passion for Pure Racing, whether they are World Champions or fans attending our events! The 2019 NWES season promises to be one of the most exciting of any European series!”

Villeneuve will be an immensely valuable addition to the Go Fas Racing NWES lineup. The team made its European debut in 2018, winning its first NWES race at Brands Hatch in the ELITE 2 Division and bringing home the Rookie Cup final classification.

“We are really excited that a former Indy 500 and Formula 1 Champion will join Go Fas Racing and we really feel that with Jacques’ talent and the team we put together, we have a shot at the NWES championship this season,” said Go Fas Racing owner Alain Lord Mounir.