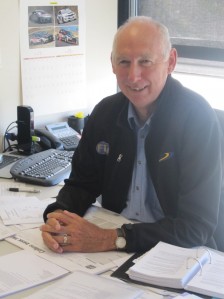 Budd, who has been the General Manager for nearly seven years, has also been the acting CEO following the adoption of a new constitution in May 2015 by the governing body of motorsport in New Zealand.

The move from a GM to a CEO was one of several constitutional changes, as the organisation’s management moves from an executive committee significantly involved in the daily operations of the organisation to a board which takes more of a governance role.

Mr Harris says: “The day-to-day operations of MotorSport New Zealand from our headquarters in Wellington will now lie squarely with our CEO Brian Budd, while our six-person board will focus on the overall strategy and direction of the organisation, planning for the sport’s future and its finances.

“We are very pleased Brian has accepted the role as our first official CEO. He’s been with the organisation for several years as our general manager and has the respect of our member clubs around the country.

“Brian has built a good rapport with clubs, competitors, officials, media and event organisers across the spectrum of motorsport categories for which we have responsibility.

“The adoption of the new constitution in 2015 sees MotorSport New Zealand go through a transition phase and Brian brings stability to the organisation as we design and implement the next phase of strategy and development for automotive sports in New Zealand.”

A competitor himself in classic events, Mr Budd says, as an organisation, MotorSport New Zealand has been through a period of change and challenge in recent years.

“I’m delighted to continue to lead this organisation into the future,” Mr Budd says. “We are moving through a significant phase of restructuring as we separate the responsibilities for strategy and governance of the sport from the organisational and operational aspects.

“The next step for me and our team is to cement our new structure for the betterment of the sport. There will be changes at MotorSport New Zealand, but not in the essential deliverables for our valued competition licence holders and member clubs.”

Its many functions include the licencing of competitors and events, the development and scrutineering of technical and safety regulations for race car categories and its sanctioned championships.

As well as the competitors, officials and member clubs, MotorSport New Zealand has responsibilities to the motor trade and other supporters, government, the public and to the FIA.

Together with its organisational role, MotorSport NZ is concerned with the fitness of drivers, circuit (including all courses and tracks) safety, the construction and eligibility of vehicles, all aspects of safety, administration of justice and the progress of motorsports in New Zealand.

It is funded through licencing of competitors and events, and organisations such as Sport New Zealand. MotorSport New Zealand, under its agreement with the FIA, outsources three specific categories of four-wheeled motorsport – namely, kart racing, drag racing and vintage car autosports – to dedicated organisations.