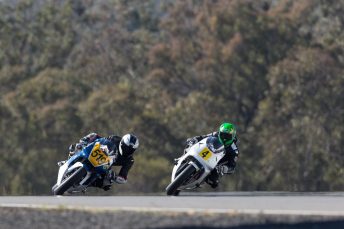 Leigh Holmes (Kawasaki ZXR 400) backed up the pace he showed in yesterday’s practice sessions to take pole position for the Motorcycle Sportsmen Club Challenge class from his time in Qualifying Two.

Race One was a master class display by Holmes, who won by a whooping 23 seconds. Carroll would finish in second position behind winner Holmes. In third place was Nadzri, 36 seconds behind the leader.

Fastest lap of the race went to race winner, Holmes.