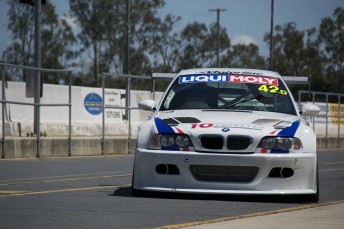 More and more teams are announcing their driver line-ups for the upcoming 2015 Liqui Moly Bathurst 12 hour race at the iconic Mount Panorama circuit, the latest to do so is the Queensland based BMW team Motiv8Racing.

Motiv8Racing has again entered its BMW E46 M3 GTR in Class D, the driver line-up headed up by car owner Anthony Gilbertson, and with him two other talented racers, Karl Begg a Kiwi who lives in North Lakes Queensland and Ballina’s Jason Clements.

All three drivers are BMW specialists, who between them have driven very few cars in competition that have not carried the BMW badge. 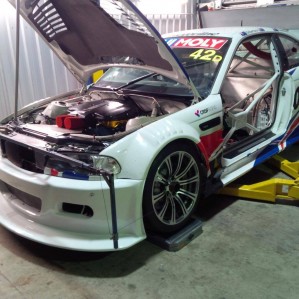 The 2014 round the clock race saw the Motiv8Racing team experience the highs and lows as only Bathurst can deliver, for they had taken the Class D pole time in qualifying, only to have a third driver Angus Chapel, not with the team this time round, have an off at the chase late in qualifying.

That off-track excursion tore an oil line off the sump and subsequently ruined an engine after it was driven back to the pits with no oil pressure, and despite a mammoth task overnight in an attempt to build another engine to adapt to the GTR, the heart braking decision to withdraw was made after just one lap on Sunday.

Director/CEO of the Gold Coast based Hallmark Homes Pty Ltd, Gilbertson started his motorsport in 2010 doing sprints in a BMW E30, and then the following year moved up to circuit racing in Queensland Improved Production with the E30, where he won the 2-3 litre category and finished 2nd overall for the over 2 litre class on debut. He had also purchased the unfinished BMW E46 M3 GTR from Motorline BMW, and spent 2013 completing the build.

“I raced the Bathurst 12 hour for the first time with GWS Motorsport in the BMW 335i owned by Peter O’Donnell from Parkes, and the young Kiwi V8 Supercar driver Andre Heimgartner,” said Gilbertson. “The car struggled all weekend but we ended up winning class ‘D’.

While Clements drove with Gilbertson and his Motiv8 Racing in their 2014 Liqui Moly Bathurst 12 hour campaign on the mountain, this year will be the first round the clock race for Begg. However he did compete at the Bathurst Motor Festival on Mount Panorama last Easter with Gilbertson.

On that occasion they teamed up in a BMW E30 in a one hour NSW Improved Production One Hour touring car race, where after starting 25th they finished 15th and won their class.

They also drove together in the second round of the 2014 Australian Endurance Championship in the E30, the Ipswich 300 at Queensland Raceway mid-season, and did a great job to take provisional pole before finishing second in the Top 10 Shoot-out.

In the race they were running a fine second until the E30’s brakes failed and they were forced to retire.

A comparatively late starter in motor racing, Begg did not start until 2012 when he contested several sprints and hillclimbs, before making the move to circuit racing the following year. In his debut season driving his BMW E30 he finished second overall in the Queensland Improved Production championship.

Last year the Software Developer really came to grips with the racing, and from the 35 races he contested in the E30, Begg won 17, scored 24 podiums, took 5 pole positions and 18 fastest laps. As a result he won the Queensland Touring Car Championship and finished second in the Improved Production title.

Making it three very talented drivers in the GTR for the 12 hour, Clements a former karting champion has driven some magnificent race cars including a Formula 2 Ralt RT4 Formula Atlantic, and a car that finished fourth in the 1986 Indianapolis 500 driven by Al Unser Jnr, a Lola T8600 owned by keen motor racing enthusiast Graham Mein.

Once he switched to touring cars, Clements has been racing a BMW M3 in Improved Production, mainly at Queensland tracks, but he has competed interstate, including the 2012 Bathurst Motor Festival.

Contesting the Queensland Improved Production Championship he has been a regular pole sitter and race winner, but the lack of resources to do a full championship have kept him from winning any pointscores.

For this year’s Bathurst 12 hour, the team have not had anywhere as much work to do on the GTR as they did in 2014, instead Gilbertson said it’s been just refining it.

“We’ve added things like ABS and fly by wire throttle to make it more of an endurance car.

“We have also been able to do a fair number of practice days and even did an endurance test day on the 19th of December, our last test day, with full crew and driver line up.

“We did long runs, multiple pit stops and driver changes to help get everyone ready. Was a very good day and the car passed with flying colours on the 34 degree day,” Gilbertson concluded.