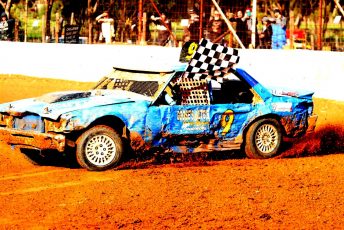 What a year it has been for the Young family, first of all Jake wins the Crash and Bash Victorian title for Opens at Alexandra and now mumsie Leanne Tipple-Tipple – Young wins the Ladies Victorian Crash and Bash title at Nagambie and throw in a couple of race victories along the way and its impressive no matter which way you look at it.

For this years Ladies title each competitor was given three qualifying heat races to determine their start positions for the twenty five lap Victorian title, most of the time the girls were driving race cars that blokes were thrashing and crashing in their own races on the very same day, each and every woman had threatened their male counterpart to bring the car back to the pit enclosure in one piece or suffer the very serious consequences, of which were none too delightful in any case.

Sharon Morrison was behind the wheel of the beautifully prepared XF Falcon Tim Cole races. Morrison quickly moved to the front in heat one after getting past Linda Sinclair on lap two and went on to win the eight lap heat in an outstanding finish to the race by just 0.023 of a second as Tipple – Young tried to close in on her. Mel Brown, Sinclair, Kath House-George and Tori Warren all finished on the lead lap setting the tone for the racing to come.

The big moment in heat two was Airelle Wollmer in David Parkers machine crashing her way through a few of her competitors in the dog leg on the first lap she then obviously decided that she had done enough and parked the race car on top of the turn one marker, the big tractor tyre. Parker who was passenger in her had a blast, the best 34 seconds he has had in a long time.

Next up in heat two the race went start to finish without any cautions, as did race one. This time though the girls were fifteen seconds quicker as Lea Judd who had moved into the lead by the half way mark of the race took the win over Maleah Brown, Allyssa Montebello, Bianca Brown a lap down and Erin Brown all recorded as finishers. It was a six second win to Judd.

Into round two and Mother Goose (Tipple – Young) controlled the race from the outset recording a six second win, Mel Brown then Bianca Brown and Wollmer all finished on the lead lap of the race.

Making it two from two, Morrison led from start to finish in the fourth qualifier stopping the clocks six seconds ahead of Montebello, Maleah Brown, Sinclair, Warren and Erin Brown. Morrison clocked the fastest heat race time of the day with a 29.157 second lap, which would have put her on the pace with most of the blokes racing on day one. She was driving nothing like her possessed husband Dale does, she was cool, calm, calculated and deliberate in her moves, Dale is just calculated in destroying things.

The fourth heat was also the fastest for the girls taking just 4 minutes 9.262 seconds.

Montebello reversed the result as she recorded victory over Morrison in the fifth heat making a pass on lap seven to go on and take the win.

Warren finished in third much to the delight of P Diddy Paulie and Mrs P Diddy and of course Tori’s lesser known brother Bradley. Wollmer finished in fourth and Mel Brown in fifth.

Tipple – Young then had the biggest qualifying win for the ladies for the weekend when she finished twelve seconds ahead of Sinclair, Bianca Brown, House-George, Judd two laps back and Erin Brown.

With all the qualifying done, all that was left was to get the title run and won.

Morrison led lap one from Montebello and Judd with the pole sitter dropping back to eighth on lap one after being hammered. Tipple – Young then had some hard work to do to work her way back forward. Montebello who started fifth made short work of mucking around in second and was in the lead by lap four, looking likely to get away out front.

Ooopp’s spoke to soon! By lap six Lea ‘Bungette’ Judd was the new leader as Montebello slipped down the queue. Tipple – Young and Maleah Brown were chasing Judd.

Judd lead the girls until lap seventeen when Tipple – Young made her move, shoving her way to the front of the field as Judd was left trying to get back up to speed.

At the chequered flag Mother Goose or Mrs Goose had joined her Gosling Jake as 2017 season champions making it a family double picking up the title win from Montebello who moved up the chain from her fifth spot half way spot, Maleah Brown who was in second with a few to go settled for third, Judd was in third then her car just died after suffering fuel flow issues right through the day she was of course a little cranky and coarse words could be heard by all loud and clear, Morrison a lap down after earlier bursting a tyre and being required to pit in order to continue on, secured fourth after working her way back forward and House-George charged forward with about seven laps to go to move from tenth to fifth two laps down.

Warren finished in sixth three laps back, then Wollmer and Erin Brown competing in her first ever Victorian title were recorded as finishers.

Mel Brown wrecked Jimmy’s car, nothing more to be said. Well alright, she snapped an axle and shredded the spider gears on the very last lap of the race when all she had to do was cross the finish line to be placed, good job Mel!

Continuing the good luck for the Brown girls was Bianca, she was in the top five and with half a dozen laps to go the top ball joint let go whilst in the dog leg section and it was all over.

Warren on the roll around lap of the title race decided she had to go back to the pits, she either needed to go to the bathroom for a nervous break or she thought she was going shopping in the family wagon and had forgotten the kids. Anyways, she re-joined half a lap behind the field on the first lap and played catch up from there to finish in sixth.

House – George was ecstatic to finish fifth after Ronnie George tried to sabotage her race. You see Ronnie was passenger and he hadn’t done up his seat belts properly, after being spun by Tipple-Tipple – Young George nearly crapped himself and House – George sat infield whilst Ronnie put his belts on tighter, this cost Kath a lap.

Tipple – Young was obviously delighted to complete the family double. “I have to thank Steve and Jake and the family for the work that goes into our car. We do this as a family and we get so much enjoyment out of this, Steve wants his keys back to the car to go have some fun himself though. Well done to the other racers, it so much fun and well done to Nagambie on how they continue to treat us so well for our title.”