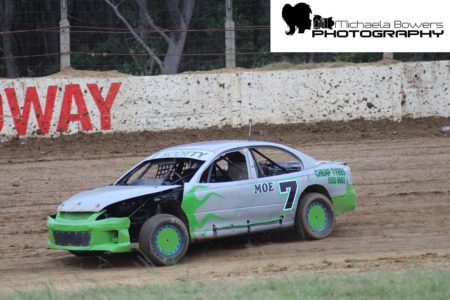 Scott Laidlaw from the Latrobe Valley has won his fourth Division 2 Hot Rod Victorian title coming back after eighteen months away from racing to reclaim the crown in front of a healthy crowd on Saturday night at Bairnsdale Speedway.

Other winners across the evening included Trent Wilson in Limited Sportsman, Daniel Stewart in the Standard Saloons and Jack Yeomans in the Junior Standard Saloon feature.

Four heat race qualifiers were competed in before the Victorian title race for Division 2 Hot Rods and Leigh Mitchell, Scott Laidlaw twice and Troy Hutchison shared those victories with Leigh Burkett being involved in the two closest results finishing second twice by less than half a second.

Laidlaw lined-up from pole position in the final with Hutchison alongside then Mitchell, Jason Seymour, Melissa Tatterson, and her father Rob Tatterson in the top six starting positions. Laidlaw secured the front position as the race got underway with Hutchison putting on the early pressure. Mitchell soon passed Hutchison into second spot whilst Hutchison and Daniel Angus battled. Angus moved to third on lap six and Laidlaw still lead from the front.

Twenty-five laps was the race distance and Laidlaw maintained his lead throughout the race. When the chequered flag unfurled Laidlaw took the win from Mitchell, Angus, Hutchison, and Melissa Tatterson.

Trent Wilson had a clean sweep of the Limited Sportsman qualifiers winning three from three setting a six-lap record in the process. In the ten-lap final though things did not go according to script with Matt Hurley taking the lead from lap six of ten and winning his second final this season. Wilson finished second with Mark Both in third and Paul Haddon fourth across the line.

The biggest class of racing in terms of entrants was the Standard Saloons with the Victorian champion Shane Stewart and his third placed finishing brother Daniel in the field. Daniel went on to win three of the six qualifiers whilst Shane won one along with Josh Thomas and Patrick Vuillermin.

From the start Daniel Stewart had a lead over Shane Stewart with Vuillermin, Thomas and Leigh Gooding in the top five. On lap six Thomas race came to and end. The Stewart boys still held sway at the front and soon after Vuillermin dropped way back down through the field as Matt McDermott and Scott Roberts secured their top five spots.