Morrison wins final event of the Crash and Bash season

Morrison wins final event of the Crash and Bash season 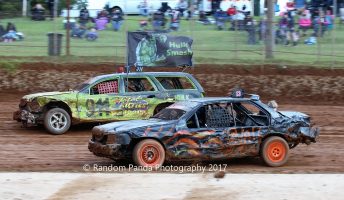 Crash and Bash racers finished the season at Nyora on Sunday the 25th of June with around twenty competitors keen for the fun and chasing some extra prizes put up by supporters of the class and when the dust settled, it was Mr Entertainment, Dale Morrison who picked up the victory defeating the Sheriff Jimmy Kane and Ron George in the Crash and Bash Rumble.

Each racer competed in three heat races before the three wide start in the feature race.

The indication of how the day would go was clear in the first heat race when Brad Warren and Rob Bushell didn’t hold back from spinning each other. Warren spun the Victoria two driver first, before Bushell a few laps later made the pay back spin and went on to take a win from Warren who recovered to finish second with Med Medley, Kane and Jeff House the top five finishers.

Scott Van Loo doesn’t do much racing these days, and if the first heat was an indication of what was to come, Scotty shouldn’t have gotten out of bed for the event. He was spun and damaged in the first heat as Jake Young the Victorian champion took the win over Morrison, Ron George, Trent Cauchi and Jason Judd.

Young then lost a wheel and had some damage to the car in his second heat as Medley continued to play the right tunes collecting a win. Judd, Bushell and Dave Sheridan finished behind Medley and Warren then won the second heat of round two from Kris Bevenja, Cauchi and Alan George. Bevenja was in the Daniel Wanders owned car and it looks like Wanders may have to stick to track preparation from now on as Bevenja completed more laps than Wanders had all season.

Morrison claimed a win in the third round when he led Ron George and Bevenja to the finish before Alan George had a huge rollover in turn one and two going over and over before coming to a sudden halt landing on its wheels in the final heat of the show. Warren won the final race from Bushell and Medley.

Jimmy Kane after realising during the first heat that his car was flat with a broken fuel pump had to borrow mums car to make a quick trip home to pick up parts just so that he could start the feature race, whilst he was home he collected bits and pieces for his mates cars as he took phone orders on the way such as steering hoses for ‘Bungy’ and Axles for Jeff House.

Then Kane raced back to the track with a fuel pump from Andrew Corlett’s car, to get the cars all sorted and back in the feature race. What a darling mother he has, she can expect a speeding ticket in the mail Thursday!

Another casualty from the heats was Jake Young the Victorian Champion he was leading heat two when he entered turn three where two competitors had come together in front of him. He got smashed into the two and the diff punched out of the car tearing the wheel top control arm and bending the diff housing.

Young watched as his tyre and axle rolled past him onto the infield.

In the feature race Warren had complete control of the race for much of it, however these type of races you can be brought un-stuck quickly with Warren spinning on his own without contact as Morrison was working his way through spinning others around him making a path towards the front as other competitors kept dropping away.

Warren exited the race with a broken Watts Link bolt and a flat right rear tyre.

Morrison then in a fashion reminiscent of Steven Bradbury the typical Australian hero found himself in the lead of the race and went on to take victory from James Kane, Ron George who earlier in the day thought he would not get to race after realising a tank breather was broke on the way to the track however Steve Brown fixed that, Kris Bevenja the surprise new guy in the event Andrew Miles and Trent Cauchi.

As usual win, lose or a non-finisher Morrison gave the crowd some entertainment well after the race had finished when he tried in vain to blow up his engine with nose against the concrete burnout and static burnouts, knowing Dale as we do, he will find some way to blow the engine up before the start of the new season!

The event had some extra support and prizes sourced by some of the competitors from Pakenham Engines, Miles Mechanical, MNT Commodore Wreckers and Total Auto’s Pakenham.