Morrison back to back at Nyora in Victorian title, Miller and Hickson win also

Morrison back to back at Nyora in Victorian title, Miller and Hickson win also 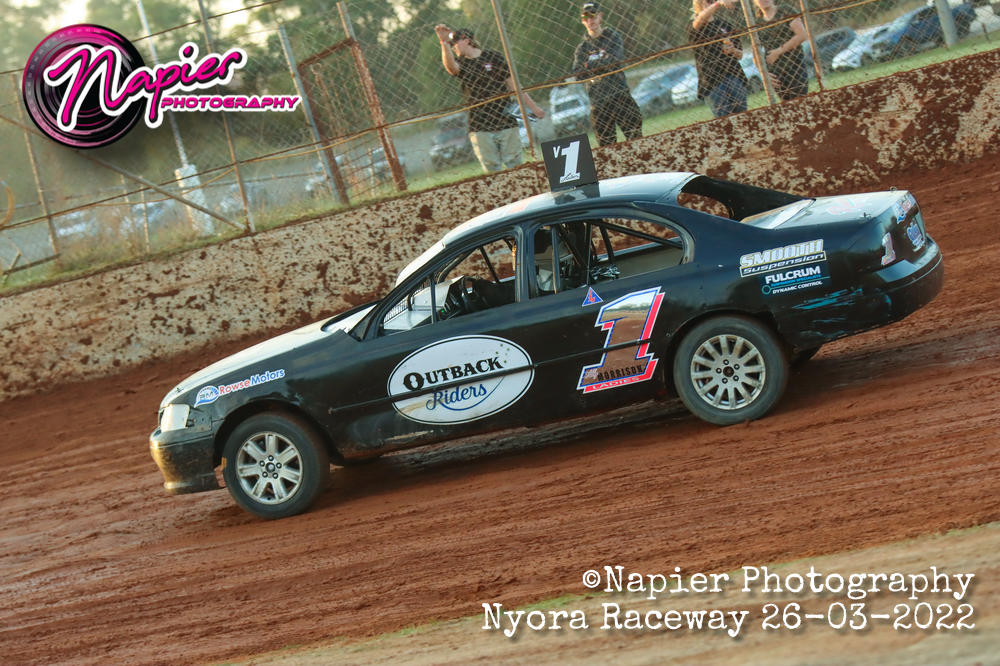 Pakenham racer Ally Morrison, a member of the Nyora Raceway Incorporated has gone back-to-back in winning the ‘Napier Photography’ Ladies Standard Saloon Victorian title when she led to the finish line her team mate on the weekend Felicity Roycroft with both driving for Brad Hill Motorsport, whilst Langwarrin racer Zoe Young finished in third. Damien Miller won the important Sports Sedan Robert Bickham Memorial, a man whom he knew, and Daryl Hickson got an important Dirt Modified shakedown victory before the upcoming Dirt Modified Victorian title at Nyora in late April.

The Ladies Standard Saloon title was the main event of the evening and it was the second time in succession that Nyora hosted the annual title with many of the Nyora member women putting a lot of effort into the presentation of the event and the rewards that come with competing and performing well. Morrison’s team owner Brad Hill gave her a team mate this year so that he had two chances of being the winning car owner after securing Roycroft to drive his own car after he and Morrison built a brand-new car for the champion.

Zoe Young was the first to win a qualifying heat race with Jaimi Barber winning the second by less than a second. Morrison won the third by more than six seconds with Roycroft winning the last just in front of her team mate by .418 of a second.

Fifteen drivers started the title race with Roycroft and Morrison at the front then Young, Barber, Ellen Vagg and Nicole Vaughan making up the top six starters. Morrison moved to the lead on lap one and at the five-lap distance Morrison was leading Roycroft, Young, Barber and Allana Ardley with Vagg already out of the race after an incident. A further five laps in and the positions remained the same and again when we reached the fifteen-lap mark.

It took until lap one for the next change in the top five when Ardley exited the race and Vaughan moved into fifth spot and when the race reached the end with Roycroft having tried everything she could to pass Morrison, the team mates finished one and two with Morrison, Roycroft, Young, Barber and Vaughan being the official top five placings.

Robert Bickham was a Nyora Raceway member and was last living in the South Gippsland area when he passed away and the memorial race is contested by many that knew of the man. Damien Miller who went on to win the race this year, was one of those men who knew of ‘Woggy’ Bickham. In qualifying racing leading into the feature event Brendan Miller, Dale Smith, Jacob Blencowe, Smith again, Scott Angus, Damien Miller, Jeff Blencowe, Andrew Jordan, and Jamie Paull all took victories.

Damien Miller who had won at Alexandra Speedway the week before and Dale Smith started the feature race from the front row with Brendan Miller, Simon Bent, Paull, and Jeff Blencowe filling up the next two rows. Five laps into the race Damien Miller led Smith, Bent, Angus and Paull. On lap thirteen Smith moved to the lead only for Miller to snatch it straight back and at lap fifteen as Bent pulled out of the race, Damien Miller lead Smith, Angus, Paull, and Jordan.

Paull exited the race with mechanical issue on lap twenty and Smith found himself way down in the pack after race incidents and action leaving Miller leading Angus, Jordan, Jacob Blencowe, and Jeff Blencowe. At the finish line Miller took the win from Angus, Jordan, Jeff Blencowe in front of his son Jacob.

Meanwhile in Dirt Modifieds as mentioned Daryl Hickson finished ahead of Tyler Scott and Brett Clarke who won back in January at Nyora. Troy Scott was fourth and Brent Hough fifth. Sean Lister visited from out of town and took the win in Unlimited Sedans ahead of Pakenham boys Travis Ramsdale, Corey Ramsdale, Daryl Nicolson and Anthony McKean whilst in the Division 2 Hot Rod class whom have their Victorian title this coming Saturday night at Nyora, Trent Wilson defeated Rhys Lansdown, Bobby Devine, Ben Crittenden, and Terry Crittenden.