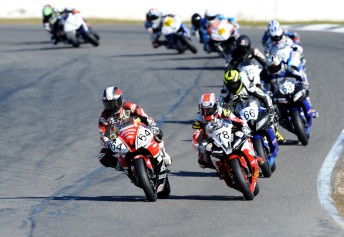 Maxima Yamiha rider Aaron Morris heads to Wakefield Park in New South Wales this weekend in a commanding position in both Supersport Championships, at the 2014 Australasian Superbike Championship.

The Newcastle born rider has a commanding lead in both the Saturday YMF Loan Series, and the Sunday Swann Series, and will be hoping that he continues his form into the penultimate round of competition.

Morris has dominated the Saturday Supersport category recording 11 wins from 11 races so far this season to build a 47-point series lead from his nearest rival, while he is winning the Sunday category with a 16-point championship buffer.

Speaking ahead of the Wakefield Park event, Morris said he is looking forward to hitting the track at the business end of both series.

“Getting to the second last round, we are looking pretty good in the championship, so I am really looking forward to getting back to Wakefield Park.

“It’s a good track and it is pretty tricky with some of the resurfacing patches, but as long as you keep an eye out for them it’s a pretty fun track to ride at.”

Morris said that despite being the rider everyone is trying to catch, he doesn’t feel like there is a target on his back.

“Not really – I have been leading the Saturday championship all year and got in front of the Sunday Championship halfway through, but really for me it doesn’t bother me too much.

“In the end I just have to try and do what I can do, and anyone who wants to try and beat me they can try their hardest and I am going to keep riding how I am riding and we’ll go from there.”

While the Sunday Supersport Championship – part of the 2014 Swann Insurance Australasian Superbike Championship, carries more prestige, it is actually the Saturday event that Morris has been aiming to win first and foremost.

“Whereas on Sunday it is nowhere near that prize – so we have actually been aiming for the Saturday Championship, and I have been undefeated so far.

“I think everyone else seems to learn, they don’t seem to be on pace on Saturday and get their setup right for Sunday when they are a bit closer to me – that seems to be what keeps happening.

Morris believes that his string of wins on Saturday means that riders will now be focusing solely on trying to take top spot on the podium in the Sunday series.

“It makes sense for Aiden (Wagner) who I think is only 16 points behind me on the Sunday, so he’d obviously be focusing on that.

“I think he’d be giving up on the Saturday because if I come third in every race moving forward I win it, so makes sense for them to focus on the Sunday.”