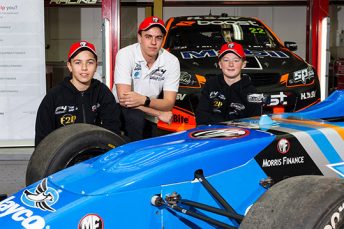 National Commercial Finance and Leasing leaders Morris Finance have been welcomed today as a corporate partner of the Confederation of Australian Motor Sport (CAMS).

Announced just prior to the 2017 Academy camp on the Gold Coast, Rising Star Simon Fallon was joined by former CAMS Foundation graduates James Courtney and Scott Pye alongside aspiring karting stars, in welcoming Morris Finance to the CAMS community.

“As a proud Australian business operating on a national basis, we are delighted to support local and international pathways for young talent to achieve their goals and ambitions,” Managing Director of Morris Finance, Nathan Murray said.

“From an initial alignment with Nick Percat, our business has enjoyed assisting a young man as he progressed up the motor sport ladder to become a Bathurst 1000 and Supercars race winner.”

“Accordingly we would like to continue our support behind tomorrow’s aspiring motor sport talent as they learn their craft, progressing from karts, Formula 4, and hopefully to Supercars or Formula 1 one day,” Murray continued.

Morris Finance’s alignment with the CAMS Foundation comes off the back of the Rising Stars programme’s most successful CAMS Jayco Australian Formula 4 Championship round at Phillip Island.

“It is fantastic to see an Australian company in Morris Finance lending their support to Australia’s next generation of drivers with our various development programmes,” Arocca said.

“On behalf of CAMS and the CAMS Foundation team, we look forward to a successful partnership as we continue to unearth Australia’s next motor racing heroes here and abroad with the assistance of Morris Finance.”

The CAMS Academy programme will start its junior karting academy this Sunday, 2 July before returning for a senior elite driver academy later next week. The CAMS Foundation Rising Stars next embark on Queensland Raceway, for Round Five of the CAMS Jayco Australian Formula 4 Championship.