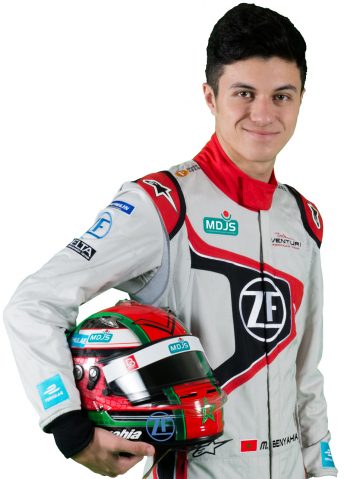 Michaël Benyahia is the reigning Formula Renault 2.0 Northern European Cup champion. The 17 year-old has 46 karting wins under his belt, and achieved six podium finishes in the French F4 Championship.

In 2015, he joined the prestigious Autosport Academy run by the French motor sports federation, the FFSA, and in 2016, was selected to race in the French F4 Championship, where he finished third.

A key member of the Venturi Formula E team

Michaël Benyahia is the youngest driver registered for the Rookie Tests. He has been with the Venturi Formula E team for three months. Most of his work is done in the simulator, where he prepares for races with the engineering crew. Michaël also attends Formula E race meetings, to hone his knowledge of the discipline. On 14 January 2018, he will be driving the Venturi car for the second time, having first taken the wheel at the Valencia circuit in Spain last October.

“I am delighted to offer Michaël Benyahia the opportunity to drive again, and at home too. This decision reflects my commitment to supporting Michaël in his career development.” – Gildo Pastor, President of Venturi Formula E Team

“I’m well aware of the chance I’m being given. The Formula E championship is growing exponentially. As a result, it’s rare to get a drive. I’ll do everything I can, to repay the faith that Gildo Pastor and his teams have placed in me.” – Michaël Benyahia, Venturi Formula E Team development driver

Michaël Benyahia is the youngest ambassador for Moroccan motor sport. The Formula E World Championship is due to visit Marrakesh on the day before Michaël’s test drive, on 13 January 2018.

The race and the Rookie Test are two major events for the young man and his compatriots, with their country experiencing rapid growth in the renewable energy and automotive sectors.