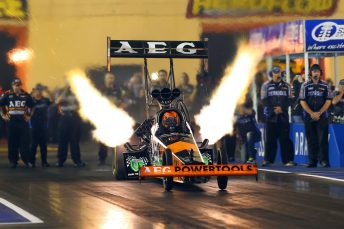 Yet for Darren Morgan, who next season will celebrate 10 years of Darren Morgan Racing in Top Fuel, the dream has become a reality.

He has won 4 Top Fuel titles previously, but the family man from Mildura in rural Victoria has an insatiable appetite for success. He is 37 points adrift of 400 Thunder Championship leader Wayne Newby heading into this weekend’s Gulf Western Oil Nitro Thunder, but if he has proved anything over the last decade it is that he should never be counted out of contention.

“We want to put on a great show for the fans that are coming out to see us, and take Drag Racing back to where it deserves to be in this country”, said Morgan. “The championship is kind of out of our hands at this stage, but if we go out and try to win every round then we start to put the pressure back onto the other guys in the hunt”.

Ever since rolling out a new car for the start of the 400 Thunder Top Fuel series back in , the AEG Power tools driver has had a smile on his face. The reason? The new car was responding to every change that the team were making – which makes for a very happy team owner and driver.

His crew chief, Ben Patterson, is one of the main reasons behind the success of the team. He remains a quiet achiever in modern Top Fuel racing and with a wealth of experience far beyond his years, Patterson has taken to his role with a combination of attention to detail and passion that is hard to match.

“The new car has been a pleasure to work on , it took us a while to get a handle on it but once we figured out what it needed, it really started coming to life”, Patterson said. “No two top fuel cars are the same no matter how hard you try to make them similar, and now that we know what it wants then we can start getting after it this weekend”.

Keep your eye on the AEG Power Tools teams this weekend because there is plenty of fight left in this championship calibre team.

Darren Morgan will be racing as part of the Top Fuel Category in the 400 Thunder Series at the Gulf Western Oil Nitro Thunder on 5th & 6th May 2017.