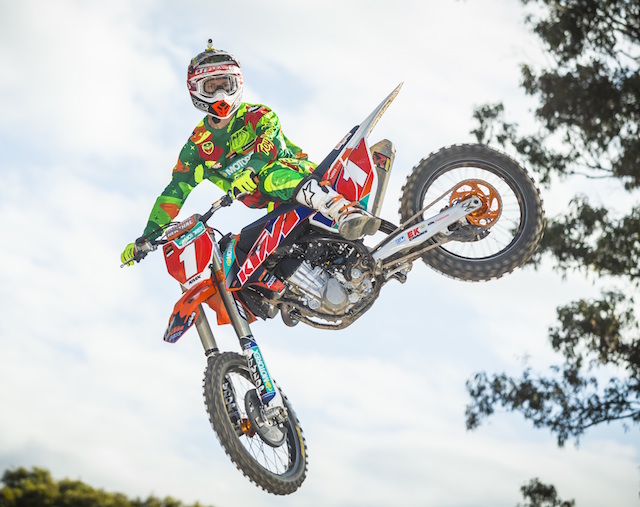 MEDIA RELEASE: In what ranks as the most hotly contested pack of contenders in years, more than a dozen SX1 class riders will line up as potential winners when the 2015 Australian Supercross Championship roars into life in Bathurst, NSW, in just over a week’s time.

The new look Supercross championship kick off on Saturday, October 10, is set to be huge, taking place on the same weekend as the annual V8 Supercars motorsport feast at Mount Panorama, the Supercheap Auto Bathurst 1000.

With a capacity crowd predicted at the Bathurst Showground Supercross event – which takes place in the evening, allowing V8 fans a full day of four-wheel action on the Mountain before venturing down into town for the Supercross spectacle – a packed line-up of star riders from Australia and around the globe means the high-flying two-wheeled action will be world-class and non-stop all night long.

In the premier SX1 category, Team Motul Suzuki rider Matt Moss rolls to the startline as defending two-time national Supercross champ and has his sights set on an historic three-peat of championship wins. And with the recent news the official Suzuki team – which also includes young gun Kale Makeham – will be wound down at the end of this year, the squad will be wanting to go out on a high.

But keeping hold of that number one plate is no given for the determined Moss – who has fought back to full fitness after a mid-season crash in the MX Nationals – as the list of championship challengers this year is extensive.

NPS Kawasaki Monster Energy Racing Team riders Adam Monea and Dylan Long are ready for the title fight. Monea ran second to Moss in last year’s Supercross title and recently finished third in the MX Nationals, so his form is strong. Meanwhile Long, who joined the Kawasaki team mid-season to replace injured lead rider Jake Moss, stepped right up to the plate and scored a moto win in the MX Nationals, to prove he’s one young rider who does not let reputations stand in his way.

The KTM Motocross Racing Team also has a double-barrel attack ready and raring to go. The factory backed KTM outfit features newly crowned MX Nationals champion, Kirk Gibbs, fresh from his appearance at the final round of the World MX GP Championship in the USA, who is partnered by Luke Styke, who is a MX2 and SX2 champion from the 2013 season.

Motocross legend Craig Dack’s CDR Yamaha Racing team is back in Supercross in a big way this year, and will field a three rider squadron for the series. After a lengthy spell on the sidelines recovering from a knee injury, Jacob Wright returns to action for the Supercross championship, joining team mates Kade Mosig and experienced veteran Dan Reardon on the factory backed blue bikes.

The Penrite Honda Racing team is making a bold move to bolster its arsenal for Supercross, signing on international aces, American Gavin Faith and US-based Venezuelan champion Anthony Rodriguez to race the entire series. For Faith this will be his fifth straight season racing Supercross in Australia and after winning his second SX2 title last year, for 2015 he’s stepping up to the SX1 class alongside Rodriguez.

In the Husqvarna camp, young gun Jesse Dobson has recovered from injury and is set to start the Supercross series aboard his factory supported Husqvarna, while Aaron Tanti will also be flying the Husqvarna flag under the watchful eye of his team boss, another Aussie motocross and supercross legend, Craig Anderson.

Victoria’s DPH Motorsports Peter Stevens Yamaha team is fielding Lawson Bopping in SX1 this year, and given he wound out last year’s championship third overall, he’ll only be wanting more of the same in 2015.

Meanwhile Victorian privateer Sam Martin on his Byrner’s Motorcycles Suzuki RM-Z450 is keen to mix it up with the factory team stars. Martin scored a third in the final round of last year’s SX1 series, which helped him take a top ten finish in the championship.

Do the math and that’s more than a dirty dozen of serious contenders for SX1 glory … as we keep on saying: bring on Bathurst and bring on the 2015 Australian Supercross Championship!

To stay up to date on all the Supercross news and social media channels, and for all event details and ticket sale information, be sure to check out the official www.australiansupercross.com.au web site.