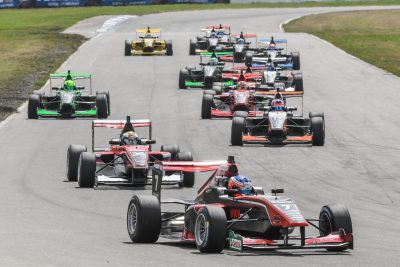 Asian, British and European based drivers are being sought for next summer’s Castrol Toyota Racing Series, which starts at Highlands Motorsport Park, Cromwell from January, 10-13.

In a mirror image of next January and February’s races, Series Manager Nicolas Caillol, is visiting five different race meetings in five weekends to recruit drivers in the junior single seater classes – Formula 4, Eurocup Formula Renault and Formula 3 – to consider racing in TRS in New Zealand next summer.

He is confident the local 15 race championship run over five consecutive weekends will attract a good-sized field in 2019. It will be the first-time drivers racing in TRS have been eligible for FIA Super Licence points.

“We’ve had a good response from American and Australian drivers already,” said Caillol, who has already attended race meetings on both continents.

He starts his recruitment drive at Malaysia’s Sepang track this weekend. It is hosting rounds of both the Formula 4 South East Asia and Formula 3 Asia championships.

Then its off to Spa in Belgium for two consecutive weekends. On July 21 and 22 there is a round of the British Formula 3 championship at the iconic track. The following weekend Caillol will be talking to drivers in the Eurocup Formula Renault and European Formula 3 Championship at the same venue.

That meeting will also be the opportunity to present Russian driver Robert Shwartzman with the Gold Star he won when he took out this year’s Toyota Racing Series in dramatic circumstances in the final race at the New Zealand Grand Prix at Manfeild.

On August 4 and 5 Caillol will be gauging interest from managers and sponsors of drivers in the German Formula 4 Championship at the Nürburgring.

A week later he will be at Rockingham, England at a round of the British Formula 4 Championship.

“I’ll be meeting with drivers and their managers who have already expressed an interest in coming to New Zealand,” said Caillol. “There seems to be plenty of interest, possibly because most of the top drivers in this year’s Formula 3 Championship have done TRS in the last two to three years.”

That series is currently led by Christchurch’s Marcus Armstrong who ultimately finished third in last summers TRS after leading from the first round.

The full schedule for the 2019 Toyota Racing Series is. –