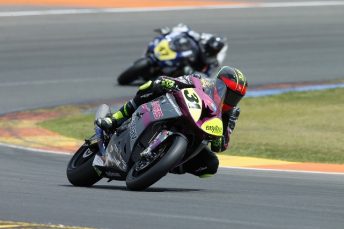 Munich. The 2017 BMW Motorrad Race Trophy has just started but is already a big success: so far, no fewer than 107 riders from 19 different nations on six continents have registered for this unique worldwide competition, 30 more compared to the same time last year. They race for 73 teams in 27 different championship classes around the globe. The first ranking of the 2017 edition has now been published. It is headed by Carmelo Morales (ESP), who competes in the Spanish Championship (CEV) on his BMW S 1000 RR of the Graphbikes easyRace SBK Team.

For its fourth edition, in 2017, new features and modifications have been introduced to make the competition even more attractive. Prize money and bonuses are given to a much larger number of participants. Now, the top 30 riders of the ranking will be awarded with a prize cheque at the end of the season (compared to 15 previously). The winner will receive 15,000 Euros, second place will receive 10,000 Euros and third place takes 7,500 Euros. For 30th place, a prize cheque of 500 Euros will be given. In addition, new bonuses have been introduced. Registration for the 2017 BMW Motorrad Race Trophy is open until 30th June 2017. All participants receive an attractive welcome package.

“The big worldwide BMW Motorrad Motorsport family continues to grow and we are overwhelmed by the huge interest of the BMW racers all around the globe to be a part of the 2017 Race Trophy,” said Uwe Geyer, Marketing Director BMW Motorrad Motorsport. “We really can say that the Race Trophy is firmly established among the BMW racers on all continents. This is proven by the fact that we were actively approached by an enormous number of riders who asked to be registered. We are also proud that in addition to our riders from the previous years, we already have a huge number of participants who are taking part for the first time this year. That shows how interesting and attractive the concept of the Race Trophy is for the BMW riders in international and national championships. It is great to see that our BMW Motorrad Motorsport community keeps getting stronger with every year.”

As part of its long-term strategy in motorsport, BMW Motorrad introduced the Race Trophy in 2014. This project forms a major pillar of the comprehensive worldwide customer sports programme of BMW Motorrad. Any BMW S 1000 RR rider competing in one of the listed championships can take part free of charge in the BMW Motorrad Race Trophy, and battle it out with other BMW racers from different series, nations and continents to be crowned the best BMW Motorrad privateer in the world. According to their results in their respective championships, the participants receive Race Trophy points for a joint ranking. The points are calculated on the basis of a complex system to guarantee equal opportunities for all riders from the different championships.

With its customer sports programme, BMW Motorrad supports its racing customers all over the world with assistance of the BMW Motorrad Motorsport specialists. The offer ranges from telephone and email support to on-site support during the race events. This international network of engineers also keeps growing. In addition to the specialists based in Munich, experts are available to help in the individual markets. They are trained in special work shops in Munich and in their respective countries.