Moore and Slade look to build on 2013

Moore and Slade look to build on 2013 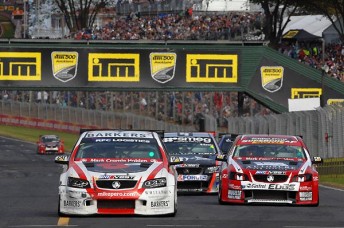 After what feels like an incredibly long off season and with a number of big changes both within the M3 Racing Team and for V8Supertourer now called “NZSuperTourer” the nation is in for a great new championship kicking of with the Rush Security 400 this weekend.

Having four months to revel in the victory of last seasons finale Moore is ecstatic to be getting back into the seat “It was a fantastic way to end the series with a win taking the team into the off season on a massive high.”

That energy has been put to good use with a complete rebuild of men and machines. The M3 crew are now more than ready to dive head on in for another year of hard battles with the top contenders for the winning spots”

Moore was optimistic about the Australian invasion, “I really get a buzz out of having all these drivers coming over from Australia, its an enormous challenge racing against a group of this talent and with Slade-Dog in my corner I am consistently building confidence and we know the performance follows as we proved last year.”

An enormous amount of effort has gone in over the break and the crew are putting the icing on the cake at the M3 Racing headquarters in East Tamaki as we speak and the travelling circus ships off to Taupo Motorsport Park Friday morning with qualifying and race one on Saturday and two races Sunday.