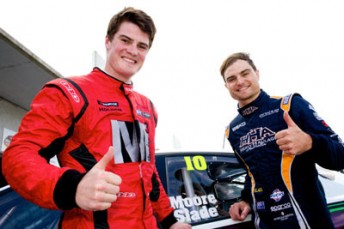 The pair partnered for the first time last year finishing on the podium in third place but Moore is confident that this year they will finish higher.

“Tim and I combined really well last year and I’m stoked he’s agreed to co-drive with me for the 2014 series,” Moore said.

“We’re both a year older and wiser with a lot more race experience including a number of podium finishes. Plus we’re just a little bit competitive. Tim is driving every week in Australia so I in just a weekend I learn an incredible amount about how to make my car go faster.”

Richard is driving exceptionally well and I am looking forward to building on the great results we achieved last season.”

Slade drives for the Supercheap Auto Racing Team in the V8Supercar series in Australia. Based in the Gold Coast his V8Supercar season has been somewhat challenging and Slade is out to prove a point in the 2014 New Zealand SuperTourer Endurance rounds.

V8SuperTourer Sales & Marketing Manager, Mike Marsden says having Australian drivers like Slade, who is the first of up to a dozen V8 Supercar drivers expected to confirm a place in the enduro series, competing in New Zealand adds to the competition.

“It’s positive in that Kiwi drivers get exposed to the Australians, it also assist with having the Australian selectors keeping an eye on what their drivers are doing in New Zealand, which in turn exposes New Zealand drivers also. Richard and Tim will be very competitive and definitely one team to watch this season in a field packed with the very best drivers.”