Momentum the key for Russell

Momentum the key for Russell NOVOCASTRIAN Motorsport’s Aaren Russell is chasing a third-consecutive V8 Supercars Dunlop Series podium this weekend, as the class celebrates its milestone 100th round at Barbagallo Raceway.

The maiden event was held at Eastern Creek in 2000, and the family outfit has been a staple since Drew Russell made his debut aboard a Commodore at Wakefield Park in 2007.

Before he stepped out of the series at the end of 2013, the older Russell brother contested 45 rounds, and Aaren has 36 under his belt since 2010, accounting for Novocastrian Motorsport’s tally of 81.

For Aaren Russell, three of the last four have included podium finishes, with third at Queensland Raceway last August, second at Sydney’s 2014 season finale and third when the 2015 campaign got underway in Adelaide in February.

The driver of the Plus Fitness Falcon heads to Perth keen to extend his career-best run.

“We’ve built a lot of momentum in recent months, which gives us renewed confidence for every event we go to,” Russell said.

“Halfway through last year, we made a big step forward as a team, and we’ve run consistently at the front of the field since then, to the point that we were able to finish on the podium in Adelaide despite some problems in qualifying.

“Racing in the Dunlop Series has been a big part of our family for many years now, so it’d be fantastic to record another good result this weekend, in such a major event.” 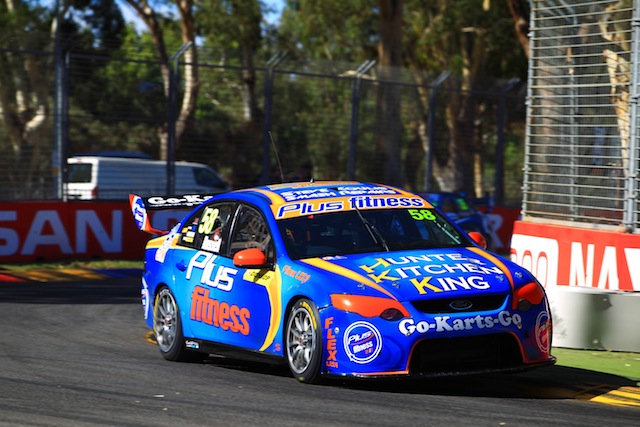 While the series’ last round was two months ago, Russell has spent time behind the wheel during the break, and at Barbagallo Raceway itself.

Assisting local competitor Anthony Arnold, Russell has been behind the wheel of an ex-Craig Lowndes Falcon V8 Supercar in recent months for driver training sessions and local race meetings.

“With only seven rounds, seat time is fairly limited, and two months is a long gap between the first and second rounds,” Russell, who finished 12th and eighth in Barbagallo’s Dunlop Series races last year, said.

“So it’s been handy to break that up, stay sharp, and get some extra experience on a circuit that I would otherwise only visit once a year and haven’t always left with the best results.

“It won’t make a massive difference this weekend when practice gets underway, but with the competition so close, every little bit helps.”

After practice on Friday and qualifying on Saturday morning, Russell will contest three, 28-lap races on Saturday afternoon and Sunday.