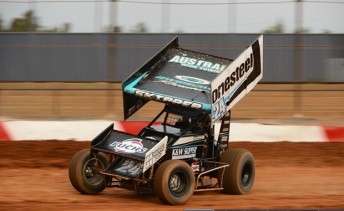 Blake’s new relaxed attitude at the track has worked a treat after netting a season’s best result to
date last Saturday night at Valvoline Raceway.

After timing in 26th quick, Blake was under half a second off quick time. He just missed the inversion
for the heat races, which put him out of position 7 in his heat as opposed to a front row start.

Finishing eighth in the heat race, this put Blake out of position seven in the B-Main. Fighting till the
end, Blake recorded an eighth place finish.

“Saturday night was a huge night for my confidence,” Blake said with a great amount of relief.

“It also was a big night for the crew’s confidence too, knowing that the effort they put in is starting
to pay.

“It was good to finally put some good, fast laps in with fast cars.”

Blake will have the week off next weekend, with no racing scheduled in Sydney, and return on
Saturday, November 22 for the next round of the Sprintcar track Championship.

“Now we just need to build on the momentum from Saturday night and make sure when we are at
the track next, we keep moving forward.

“As the season starts to hit top gear over the Christmas break, we need to make sure we are running
at our best.”

After the next meeting on November 22, Blake will contest racing at Valvoline Raceway on
December 6, followed by December 26, 27 and 29.