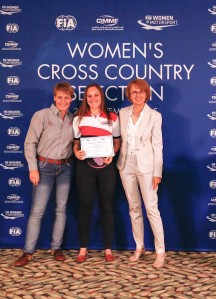 Taylor was one of nine drivers and nine co-drivers, all women, from around the world, who spent five days taking part in the joint FIA Women in Motorsport and Qatar Motor and Motorcycle Federation (QMMF) cross country rally training and selection program.

The inaugural event was all about finding one female crew to contest the 2016 Sealine Cross Country Rally in Qatar, in April next year. However, the organisers were so pleased with the success of the project, they announced funding for an additional two cars to compete in the event.

New Zealand driver Emma Gilmour and Lisette Bakker from the Netherlands came first, with Taylor in second, partnered by Yasmeen Elmajed, a wild card entry from Jordan. Cristina Gutierrez Herrero from Spain and Lara Vanneste from Belgium will team up in the third entry.

“It’s been an amazing experience,” says Taylor, who flew to Qatar a week after wrapping up the 2015 Australian Rally Championship, in second place to three-time winner, Eli Evans. She was the first woman in the history of the ARC to win a round of the national series.

“I’m really grateful to the QMMF and the FIA Women In Motorsport Commission for creating such an incredible initiative. It was so exciting to be part of it, and now to be able to return to Qatar to compete in the Sealine Rally is a new opportunity, and I will be grabbing it with both hands.

“It was one of the most intense weeks of my life and I feel like I was running on adrenaline for the whole five days. So much to learn in such a short time but so exhilarating as well. Being out in the desert for the first time was a surreal feeling.

“It was fantastic to meet so many good drivers and I made some great friends. It was really special to be able to share our passion and such a wonderful experience and I know we will be staying in touch. 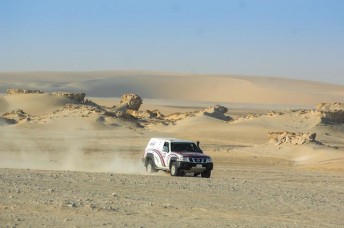 “I knew Emma would be a tough competitor. She is fantastic driver, so congratulations to her and to the other girls who made it through. I’m really happy to be one of the lucky ones who gets a chance to tackle a real cross country rally.”

Under the expert guidance of Jutta Kleinschmidt, the first and – to date – only woman to win the Dakar Rally, along with multiple world rally and cross-country winning co-driver, Fabrizia Pons, the 18 women went through an intense training programme in the desert, covering all areas related to the art of cross country rallying, including driving skills, dune and sand training, navigation, mechanics and tactical awareness.

“The chance to learn from Jutta and Fabrizia doesn’t happen every day,” Taylor says, “and I feel very privileged to have spent the week with them and gain so much from their expertise and experience. They are really inspiring women.”

Taylor’s new navigator, Yasmeen Elmajed, admits she came into the event as the least experienced of the co-drivers and a true wildcard, but was prepared to work hard.

“Fabrizia and Jutta did a great job teaching us and with a little bit of homework and concentration, it was good. I need to work more on road books but Molly lives so far away so it won’t be easy – lots of Skype calls, I think. We’ll find a way to practise. We learned from the best!”

The project, which was the brainchild of Michèle Mouton, President of the FIA Women in Motorsport Commission, Kleinschmidt and QMMF President Nasser Khalifa Al-Attiya**, supports and promotes the participation of women in the discipline of cross country rallying. There were 85 applications from entrants in 39 countries before the final 18 were selected.

“It was a steep learning curve for all the participants but it had to be; that’s how it is when you’re out in the desert on your own. Driving in the sand requires real aptitude, and reading and understanding the dunes is a big part of this discipline.

“I am so proud of this whole experience. It took a while to come together but it has been amazing. I am delighted with the outcome and can’t wait to see how everyone will fare on next year’s event.”

Taylor started rallying at 17 and won two class titles in Australia before moving to the UK in 2009 to chase her dream of a career in world rallying.

She competed in the British, European and World Rally Championships and during that time she was named British Ladies Champion two years in a row, won the inaugural European Rally Championship Ladies Trophy and was officially recognised as the fastest female rally driver in the world (2013).

Cross country rallying is a form of long-distance off-road racing that takes place over several days. Each day may involve travelling up to 900km and the events can be anything from three to 15 days.

While the sport is dominated by the famous Dakar Rally, originally run in Africa and now in South America, there are many others including those that make up the World Cup series, such as the event Taylor will contest next April.