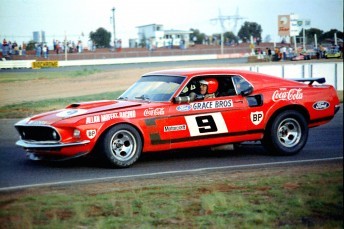 The milestone 50th anniversary of the Ford Mustang will be celebrated at the 26th Phillip Island Classic Festival of Motorsport from March 5-8 with a huge turnout of America’s most celebrated muscle car and celebrity drivers.

Taking pride of place on the three-day, 49-race programme will Alan Moffat’s famous ‘Coca-Cola’ Mustang Trans Am – the game-changing vehicle of Australian Touring Car racing when it first raced here in 1969.

Moffat, who was once described by Edsel Ford as “the most single-minded white man I’ve ever met”, won an incredible 101 of the 151 races he contested from 1969 and 1974 in the Mustang, which is arguably Australia’s most famous Touring Car and today is the cornerstone of the Bowden Collection in Queensland.

Australian enthusiasts had never seen anything like it when it erupted onto the local scene in 1969, instantly making obsolete the earlier-model notchback Mustangs raced by the likes of Ian ‘Pete’ Geoghegan, Bob Jane, Norm Beechey, Neil Allen and others.

The brand new, state-of-the-art Ford factory racer with its shark-like nose, aggressive forward rake, ground-scraping ride height and screaming Boss 302 V8 Weber-fed Boss 302 V8 engine producing 485HP was like something from another planet, with its brash young Canadian driver ruffling feathers and rumpling many panels in frustration as he sought to become Australia’s first professional driver

Ironically, Moffat never won the Australian Touring Car Championship with the Mustang, despite four hard years of trying, however the car’s extraordinary success rate and countless unforgettable performances earned it a special place in Australian racing history that will be reprised at this year’s Phillip Island ‘Classic’.

Also supporting the Mustang theme at this year’s ‘Classic’ is the appointment of former top Victorian Touring Car and Sports Sedan driver Bryan Thomson as ‘Patron’ of the 2015 meeting.

Thomson in early 1967 became the first local driver to take a current Australian Touring car overseas, when he shipped the ex-Norm Beechey 1965 notch-back Mustang to Britain for two seasons of intense circuit racing.

On his return to Australia in 1968, he imported a very early 1964/1965 Mustang from the United States, converted it to right hand drive and gave it to his wife Loel, who still has it today.

Fresh from a recent recommissioning after many years in storage, it will be driven by Thomson in the Mustang Parade that will be one of the highlights of the meeting and will be amongst more than 100 Mustangs of all models competing or on display.

Finally German historic racer Rhea Sauter will be bringing her ‘Shelby’ Mustang tribute car to this year’s Classic to support the Mustang theme – one of an expected 15 overseas drivers from the US, the UK, Europe and New Zealand taking part.

While entries remain open for this year’s ‘Classic’, more than 500 historic open wheeler, sports and touring cars spanning eight decades are expected to take part in the three-day meeting from March 5-8, which will deliver a record amount of track time for all competitors.