Modified title not out of sight for Baker

Modified title not out of sight for Baker 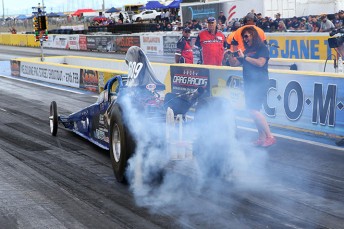 After banking a much needed 80 points from his runner up finish at Whyalla’s Steel City Raceway in Round 9 of the Series last month, Baker says a come from behind title triumph finish is not impossible.

“With the 300 point cap applied to the series leaders going into the Grand Finals, I’ve seen racers take out the Championship after going in with as little as 200 points,” says the 2013 Australian Modified Champion.

“There seems to be a lot more pressure on those at the top of the table, and with nothing to lose we’ll be throwing everything at it.”

Without a win this season, Baker says that he is comfortable with his consistency at both ends of the track producing good reaction times off the start line and accurate elapsed times close to his nominated dial in at the finish.

”At Whyalla, my lights were great, the car ran within a few hundredths over the course of the weekend and on a tricky track that other competitors struggled with.”

Baker finds himself 50 points behind the Championship leaders Matt Forbes and Simon Barlow with Kenny Stewart just 10 points ahead in third.

Given where he usually qualifies in the field, it’s not unusual for Baker to face up against the same two or three opponents in round one – including his Championship rivals above and below him in the standings.

“I think that the first round is probably the toughest round for all drag racers. We’ve managed to get past that first round more times than not this season by winning against the fast car. From there, we somehow manage to go a few more rounds and have been chipping away at the points.”

“Our initial aim this season was a top five finish, but given the way things can pan out in drag racing, I’ll be ready and waiting to sneak by if the opportunity comes up.”