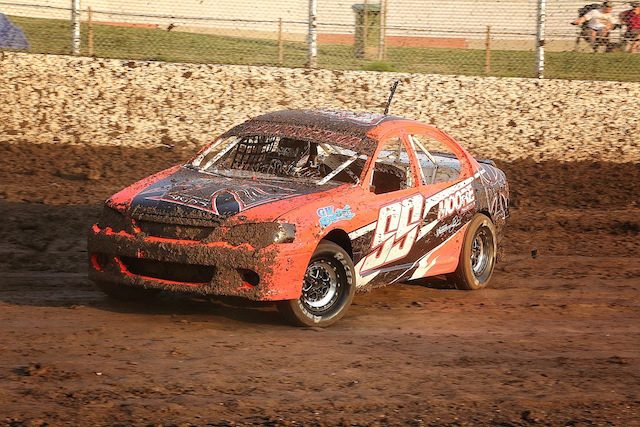 Wade Cunningham will fly the flag for Toowoomba this weekend, debuting a brand new car

MEDIA RELEASE: The opening round of the Ian Boettcher Race Parts Modified Sedan Golden Helmet Series kicks off this Saturday night at Hi-Tec Oils Speedway in Toowoomba with a once-in-a-lifetime prize on the line for the series winner.

An outstanding field has entered including a host of champions from two states including the current Australian Champion Brett Baxter from Gympie, the Queensland Champion Gavin Fletcher from Bundamba and the current New South Wales champion and Toowoomba’s own Rodney Pammenter who kicked off his season last weekend finishing third in the North Queensland Championship in Mackay.

Also among the star studded line up is a host of talent that will give the Toowoomba crowd plenty to get excited about with former National Champion Greg Worling, two time Australian Title runner-up Nathan MacDonald and former New South Wales champion David Jacobi. Last year’s Golden Helmet Series runner-up Gavin Lorensen is back and hoping to go one spot better.

Once again this season, along with a tonne of cash and prizes for those taking part in the series, all the drivers will be fighting it out over six gruelling rounds at both Toowoomba and Kingaroy to win the opportunity of a lifetime to race for Boettcher’s in their title winning Dominator Super Sedan at a couple of selected race meetings the following season.

This is a money can’t buy experience and there is no surprises why some of the best drivers in the country will line up this Saturday at the opening round.

Last year’s series champion and winner of the Super Sedan drive Gary Pagel, is unavailable this weekend away on other commitments, however last year’s runner-up Gavin Lorensen from Gympie is back and ready to fire.

The first meeting of season is always an interesting one, with minimal laps for the drivers and their cars, this one shapes up as an interesting form guide heading into the season ahead. In a lot of cases the opening round can typically throw up a few surprises and perhaps one of those might come the way from the super quick Kingaroy duo of Brett Barron and Darren Baldwin. Barron is no stranger to winning big races and being at the pointy end and as always will be rolling up the sleeves and getting busy from the moment the green flag drops on Saturday. Likewise will be Darren Baldwin who has proved his EL Falcon can matched it with some of the best in the business with a sixth place finish at last season’s Kings Royal.

Another could come from some of the local contingent taking part this weekend, those being Wade Cunningham and Lee Volk who will both debut brand new cars this Saturday night. In addition to this, Toowoomba’s Jason Gray steps up into his father’s VZ Commodore and will be looking to show some impressive car speed and then you can’t go past the local Smith brothers. Both Tim and Matt who have been Junior Sedan state champions and have quickly proved they have what it takes to be at the pointy end of the ultra-competitive Modified Sedan division.

The possibilities of picking a winner on Saturday night are honestly endless and again we continue to look through the field and see another couple of drivers out of Brisbane who could jump into contention this weekend after some great speed last season.

Those drivers are former Western Australian David Head who was decent at the Queensland Title in Bundaberg only a few months ago, and likewise keep an eye out for Russell Harris who had an outstanding result to finish fourth in last season’s Kings Royal debuting his brand new FG Falcon.

In total twenty six drivers have nominated for the opening round of the Ian Boettcher Race Parts Golden Helmet Series which sees round one being brought to us by Speedway Sedans Queensland. Gates open at 2pm on Saturday with action from 5pm.

This series wouldn’t be possible without the ongoing support from the following: