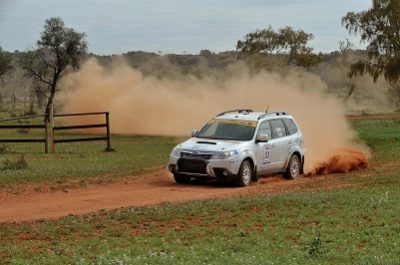 Following a successful competition debut in 2016, the 2018 Classic Outback Trial will once again welcome competitors with modern rally cars to experience the challenge of the week-long endurance event from August 18-25.

Initially born as a long-distance rally for classic cars, in recent years there has been a growing interest from competitors with modern competition vehicles to take on Australia’s Red Centre epic event. In 2016, modern competition saw a variety of cars entered, from the turbo-charged allwheel drive Subaru Impreza WRX of winners Peter Neal and Craig Whyburn, to a front wheel drive V6 Mitsubishi Magna, and even a diesel Subaru Forester.

Open to both 2WD and 4WD vehicles, including those with turbochargers, the rally offers an opportunity to participate in a unique challenge that only a long distance outback event can deliver.

A seven day adventure in the Northern Territory’s Red Centre, the event will begin each day at Lasseters Hotel/Casino, against the backdrop of the magnificent MacDonnell Ranges, and run in a series of loops to and from Alice Springs, providing crews with a central main service hub. There is no overnight parc ferme so servicing can be carried out at any time between each day’s competition.

With some 35 special stages planned, ranging in length from 5 to 70 kilometres, and offering a great variety of challenges from fast flat roads to tight technical rugged mountainous roads, the 2018 Classic Outback Trial is expected to be a highlight of the year’s rally calendar.

Unlike 2016 when the field was separately seeded in Classic and Modern, the seeding this year will be based on the Australian Rally Championship system, with the entire field seeded as one competition. Crew members are required to hold a CAMS National Rally Licence valid for 2018.

The event will be conducted to achieve two winners – one in the Classic Competition and another in the Modern Competition.

Entries closing at the end of July 2018 and more details, such as Pre-event Regulations, are available at classicoutbacktrial.com.au.