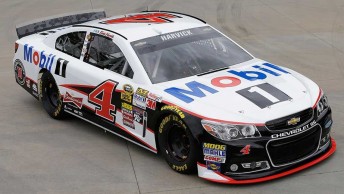 Beyond Pocono, Mobil 1 will continue to serve as an associate sponsor for Harvick’s No. 4 Budweiser/Jimmy John’s Chevrolet.

“Kevin Harvick has had a brilliant year and is a strong contender to win the 2014 Sprint Cup Series title,” said Artis Brown, global motorsports manager, Mobil 1.

“As a member of Stewart-Haas Racing, Kevin has experienced the protection and performance benefits of Mobil 1 lubricants in the No. 4 race car firsthand. Now, with the No. 4 Chevy, we’re proud to have Mobil 1 on and under the hood.”

Supported by Mobil 1 lubricant technology, Harvick has earned two wins, five top-five and nine top-10 finishes since the beginning of the 2014 season.

Harvick is currently 12th in the championship standings and virtually assured to qualify for the Chase for the NASCAR Sprint Cup under the new format, where the top spots in the 16-driver field are awarded to those who have won a race prior to the 10-race Chase.

“I’m honored to be driving the No. 4 Mobil 1 Chevrolet SS at Pocono,” said Harvick. “Mobil 1 is a truly iconic brand in motorsports, both as a major sponsor of racing and as a performance partner for top race teams around the world. I know that Mobil 1 will help me get to the winner’s circle as I drive toward the 2014 Sprint Cup championship.”