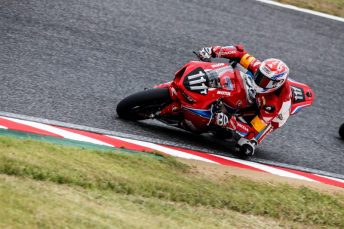 The 2016-2017 FIM Endurance World Championship was decided today as the Suzuka 8 Hours played host to the grand finale of the series. Competition has been high all weekend with permanent EWC teams looking to finish their season on a high, mixed with Japanese local teams wanting to be the Suzuka 8 Hour winners.

The 40th Suzuka 8 Hours marked the end of a mixed season for Honda Endurance Racing, who finished the season overall in 13th place. With highs and lows experienced throughout the season, the team fought hard throughout, and in Slovakia claimed a podium finish in third place.

Honda’s endurance specialists Freddy Foray, Julien Da Costa and Sébastien Gimbert have been in the mix with their ten-permanent EWC rivals all weekend at Suzuka and as the race got underway at 1330 local time, a strong finish was looking positive for the team.

It was Foray who launched the all-new Fireblade from the start line in 26th place and it wasn’t long until the team had broken into the top-20 in 19th place – ahead of the main EWC challenger SERT (22nd). It was Da Costa’s turn after the first pit stop, but his stint didn’t go quite to plan. After being held at the end of pitlane while the safety car was deployed for an incident on track, Da Costa joined a lap down.

On cold tyres after the safety car Da Costa suffered a highside, crashing out of the race. Heroically remounting and riding the Fireblade back to the garage, it was over to the super-speedy Honda crew to get the team back on track. After just two minutes in the garage repairing the damage, Gimbert returned to the race.

With the team now down in 53rd place and Da Costa ruled out for the remainder of the race after knocking his coccyx after the fall, it was down to Foray and Gimbert to bring the Honda Endurance Racing team home. In the next pit stop a headlight had to be changed after getting damaged in the crash and both riders pushed hard moving the team into 41st place.

Disaster struck around the mid-way point as Gimbert returned to the garage unscheduled with a mechanical issue. After 20 minutes in the box the Honda team were away again, but with lost places to recover. Battling through the heat and with only two riders, the Honda team eventually crossed the line in 43rd place after eight hours racing and having completed 193 laps.

The 40th Suzuka 8 Hours saw 68 teams taking part and only ten of which are permanent EWC teams, including Honda Endurance Racing.

The 2018-2019 FIM Endurance World Championship kicks off in September (15th-17th) when all eyes will be on the 24-hour Bol d’Or at Paul Ricard in the South of France.

You know for sure today’s result has not been ideal, but this is racing and some days you have good results and others are not so good. It is also endurance and anything can happen, when you race for as long as we do and also with the heat here at Suzuka, there can be many outcomes. I am pleased with the progress we have made this year, the team works together well and our pit stops are very fast now. We have a good race strategy and the Fireblade performs well for us, sometimes we just run out of luck. Of course you always want to be winning or on the podium and we did have this at Slovakia, so we have been there this year. We have also shown on many occasions that we can fight and be strong, so you know we have to take it for what it is today.

I made a mistake and I am sorry to the team for this and also for my team-mates who had to work hard. I could have ridden with the pain, but I land very heavy and it’s touching a nerve so I can’t hold my leg up for riding. So my team-mates had a lot of work in the heat and it was hard to watch and not be able to ride. We did have some problems and we did finish far back. But we have learnt a lot this year and we have some positives to take and also some good data. The team has worked hard for us all year and we work very well together, the pit stops are quick and we do have a very good race strategy, but sometimes you have a bad race.

For me I am not happy with the result, of course I always want more and I know that we were capable of a top-15 finish. You cannot help a crash as this is racing, but we did have some issues during the race, which really delayed us. But this is endurance and it is so hard at times and sometimes luck really isn’t on our side. I am happy with how the team has worked, as they work very hard for us with the all-new Fireblade. The CBR is a good machine and we have collected some good data this year, so for now we have to regroup and come back stronger.

43rd in the race today is disappointing; we had a strong start and started to make our way up the order. It was unfortunate timing with the safety car that Julien was held up by a lap and then his crash. But the team worked so hard to get the Fireblade repaired and back on track and they were in the garage for two minutes, so full credit to them. We then had a further two issues with the lights and then the mechanical issue, which did delay us further. But I am happy with how we have progressed this season, we have shown superb teamwork within the team and that we can also be competitive with the Fireblade. Slovakia we finished third and we have been strong and closing the gap on our EWC competitors, today was just not our day. We will take back all the data from Suzuka, combine this with what we already have and I know that we will be back stronger for the new EWC season when it kicks off in September at the Bol d’Or.