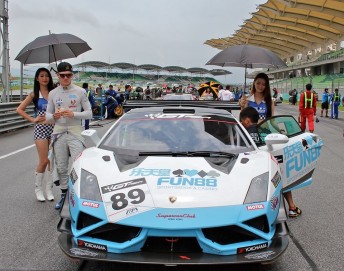 With a few weeks before the next round of the GP3 Series, ADD Motorsports driver Mitchell Gilbert was delighted to travel ‘home’ for a one-off race in GT Asia.

The Australian went back to Malaysia, the country of his birth and where he began his career, to test himself in a Lamborghini Gallardo with Fun88 Racing.

And despite the searing temperatures both in and out of the car, the 20-year-old enjoyed the team format of the race and being back among family and friends.

He said: “The Lamborghini was great fun to drive! Driving a GT car was not as bad as I’d heard from other drivers, it was just really hot inside the car and the heat of Malaysia didn’t help.

“Racing in Malaysia again was really nice, it was like returning home. It was the first place I ever drove a car on track and my friends and family came down, which was a nice change.

“I think I drove really well. In GT racing, it’s about your combined time, pitstop/driver change, and making sure the car is good for the overall time, not just mine, so it was really fun!”

After some open testing on Wednesday night and Thursday, the official practice took place on Friday – with two 45-minute practices divided between the two drivers. They were in the top six both times pace-wise.

Mitch then did the first qualifying with all the ‘pro’ drivers, which saw him finish in eighth, while Michael did the second and came in 12th.

Mitch started Race One, with Michael finishing it and the roles reversed for Race Two.

Despite facing a few difficulties including getting used to a rolling start, Mitch pitted to change driver in P7. Unfortunately, problems strapping

Michael into the car meant they were delayed by 36 seconds and although he did a great job to finish in 11th place, without the time loss they would have finished in fifth.

The track was wet but drying in Race Two and the decision for Michael to start on wets didn’t pay off. He was 12th and a long way off the lead when he went into the pit.

Despite a really good driver change, they then had a problem changing tyres and lost 25 seconds.

They ended up finishing 12th, but had the fourth quickest time.

Mitch added: “It was a really different weekend, but I learnt more about being a professional driver, being a coach to Michael and being a team player.

“The team was rusty as this was the first GT race this year and the car was brand new.

“But I enjoyed being part of a team and we were all working to be better at everything.

“Although the results didn’t show, I’m super proud of my first race in a GT and in Michael for putting a lot of effort in, of the Splitlath Group for putting this deal together and everyone at Fun88 racing for trying their hardest for us to perform as well as we did.

“I’m so thankful for the opportunity and I hope there is more to come!”