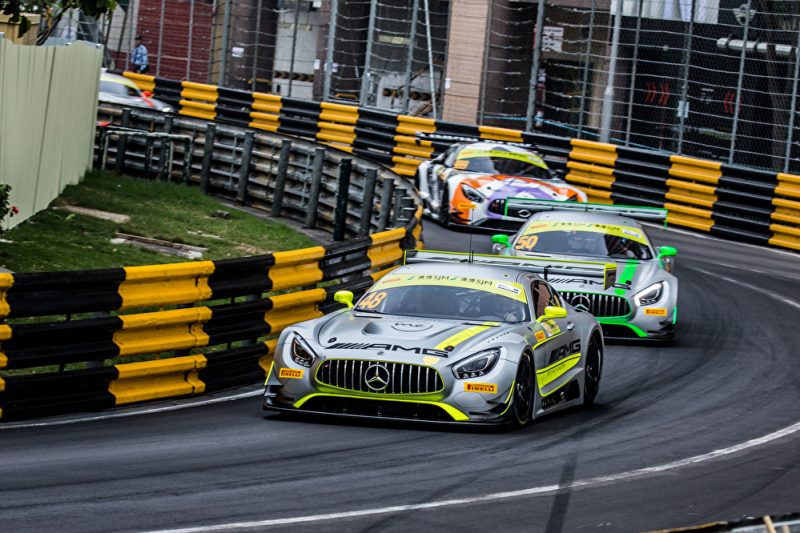 For Mercedes-AMG, the legendary Macau Grand Prix is the grand finale of a successful GT season. At the Guia Circuit, three Mercedes-AMG GT3 will be out from 15-18 November with a top line-up to defend the drivers’ and manufacturers’ titles in the FIA GT World Cup. Last year’s winner Edoardo Mortara, racing under the Swiss flag, has starting number 1. 2015 race winner Maro Engel (GER) will be racing the #888 while the #999 will have freshly-crowned Blancpain GT Series champion Raffaele Marciello (ITA) behind the wheel. Mercedes-AMG Team GruppeM Racing will be running all the three cars from Affalterbach.

The 6.1 kilometres long Guia Circuit in Macau is quite a challenge: in order to win on the narrow streets, very special driving skills are required, qualities that all three of this year’s Mercedes-AMG drivers stand out for. Without any doubt, Edoardo Mortara has the vastest experience. His total of six victories, four of them in the GT categories, earned the Italo-Swiss the nickname of ‘Mr Macau’. In 2017, he had a perfect Macau weekend with the Mercedes-AMG GT3 with fastest time in practice, pole position, first place in the qualification race and victory in the main race. In this year’s 65th Macau Grand Prix, Mortara will be racing with starting number 1 as the defending champion for Mercedes-AMG Team GruppeM Racing.

Maro Engel, who is driving the #888 Mercedes-AMG Team GruppeM Racing entry, also has experience of winning at Macau. With the Mercedes-Benz SLS AMG GT3, the Mercedes-AMG brand ambassador won both in 2014 and 2015, when the race on the street circuit was held as the FIA GT World Cup for the first time. In 2016 and 2017, he scored a pair of third places with the Mercedes-AMG GT3 and is eager to add another victory this year.

Raffaele Marciello will be racing for Mercedes-AMG in Macau for the second time. On his debut in 2017, the Italian shone with fast lap times and third place in the qualification race. This year, Marciello will be racing the #999 Mercedes-AMG GT3 for the Mercedes-AMG Team GruppeM Racing that he knows from his participations in this year’s Blancpain GT Series Asia. Coming to Macau, Marciello is boosted by having won major titles: in 2018, the 23-year-old came out on top in the Blancpain GT Series. He has his eyes firmly set on yet another prestigious success in the FIA GT World Cup.

During the Macau Grand Prix, Mortara, Engel and Marciello will be up against a high-class field of competitors: admittedly, there will be 15 teams racing for the FIA GT World Cup instead of the 20 teams entered last year. However, the competitiveness and the number of top teams and drivers have remained unchanged. Once again, the world’s best GT3 teams and drivers will be competing for the drivers’ and manufacturers’ titles that Mercedes-AMG aims to defend with its top-class line-up. For the GT drivers, a 12 laps’ qualification race is scheduled on Saturday (17 November), followed by the main race covering 18 laps on Sunday (18 November).

Edoardo Mortara, Mercedes-AMG Team GruppeM Racing #1: “To me, Macau has always been a very special race. I have had a lot of success there and I am happy every time I can race at this demanding track again. Competition in GT racing gets harder every year as just one glance at the entry list reveals. We are the defending champions and of course, even in spite of the very strong opposition, we want to defend the title.”

Maro Engel, Mercedes-AMG Team GruppeM Racing #888: “For me, last year’s race was great on one hand with the progress I made from eighth to third place, my fourth consecutive podium finish at Macau. Nevertheless, it was a pity that I had problems in the qualification race and I wasn’t able to carry my very good initial situation with pole position into the main race. This year, I will again be in full attack mode and obviously, my preference would be to stand on the top step of the podium on Sunday. The entry list may not be as packed as in previous years, but notwithstanding, the best GT drivers and teams are on the grid again. For me, the track at Macau ranks among my personal top 3 of best circuits in the world, together with Bathurst and the Nürburgring Nordschleife. I am really happy to be able to race there again together with GruppeM Racing and the Mercedes-AMG GT3. And the goal is quite clear: to bring the FIA GT World Cup title to Affalterbach once again.”

Raffaele Marciello, Mercedes-AMG Team GruppeM Racing #999: “My anticipation is huge. The track at Macau is simply unique. When you are racing along the walls at the narrow parts of the track at up to 250 km/h, there is just no way to describe it. Last year, I had a really good weekend, but unfortunately, contact in the main race made me drop back. But we had a really good speed with the Mercedes-AMG GT3. That is what we have to get on track again this year and then, hopefully, I will be able to race up front once more.”