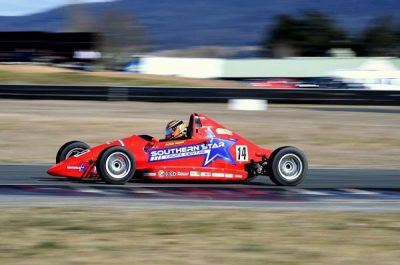 Ahead of the opening round of the Australian Formula Ford Series at Winton this weekend Lachlan Mineeff says his 2018 progression to national-level competition will be a valuable learning experience, and will bring out the best in his driving.

Following a strong campaign in the NSW Formula Ford Championship last year, in which he won the last race of the season, Mineeff will contest the full national series this year.

“The state championship was competitive, but the national series is on a completely different level,” Mineeff said.

“Winning the national Formula Ford title is a very prestigious accolade in Australian motorsport, because most of the people who have won the championship have gone on to race in categories like Supercars. This means the competition is extremely cut-throat.”

The Southern Highlands racer says he is surrounded by the right people to make a smooth transition.

“I’m very fortunate to have Cameron Hill as my driver coach; what he has achieved in motorsport has been outstanding, especially winning the 2015 Formula Ford title as a privateer.

“Cameron’s dad Colin is an accomplished engineer; he’s very good at maximising the performance of any race car, so I’m thankful to have him in my corner as well.”

Lachlan Mineeff is proudly sponsored by: