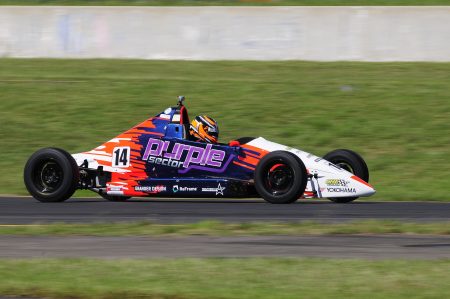 Lachlan Mineeff says race-craft will be the deciding factor in this weekend’s second round of the Australian Formula Ford Championship at Queensland Raceway, Ipswich.

The 16-year-old Burradoo resident, who recently created history as part of the youngest driver combination to finish an endurance race at Bathurst, will be making his second visit to the circuit affectionately known as “the Paperclip”, after racing there for the first time in 2018.

“When you look at Queensland Raceway on a map, it looks like a really basic design, but when you drive around it, you discover it’s actually quite a challenge to get right,” Mineeff said.

“The first two corners are high-speed, while Turns 3 and 6 are much slower and have big braking zones. Because the straights are so long, all the cars end up very close together and there’s lots of overtaking.

“Being fast in the races won’t be good enough to win; you’re really going to have to use your brain, and think about how to position the car to ensure you have a chance of passing the driver in front without losing places to drivers behind.”

Mineeff is seventh in the points after a mixed opening round at Sydney Motorsport Park.

“Our pace was really good at Sydney, but there were a couple of occasions where I ended up in the wrong place at the wrong time,” he said.

“Since then, I’ve reflected upon each race and thought about how I can improve my positioning of the car in certain situations.

“The Bathurst 6 Hour was really valuable in that regard; being on the track with so many other cars, I had to make a lot of split-second decisions which really sharpened up my spatial awareness.”

This weekend’s round will again feature three races, but due to the unique circuit regulations, they will commence with rolling starts rather than the usual standing starts.