Milner on fire at Coonawarra

Milner on fire at Coonawarra 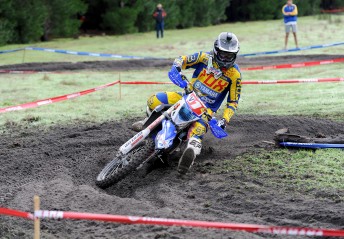 The CDR-Yamaha pilot once again proved that his still healing foot would not slow him down by taking out Saturday’s round with an emphatic victory in the outright and the E2 class.

The double round victory lifts Milner to five round wins for the year, two more than championship rival and points leader, Toby Price who once again had to settle for second position in both the outright and E2 class.

Milner, who had to chase from the back on both days said “This weekend has gone pretty well!”

“I would rather play catch up, than people playing catch up on myself, so it all went to plan really, I had a bit of pain in my foot, but you get that when you return from injury.” added the Victorian rider.

Milner’s points’ haul has shot him up the pecking order in the outright championship from sixth to fifth and lies just thirty points behind Price, while in the E2 title fight, Milner is just twenty three points behind the Motorex KTM rider.

Manager of the CDR team, Craig Dack sung Milner’s praises by saying; “To have seven weeks off the bike with quite a serious ankle injury and to come straight away and go ‘1-1’, what can you say to the performance of the guys character, he’s one of the all-time greats!”

Second place Price was happy enough with his day’s work, the twenty-six-year-old finished 9.220 seconds behind Milner and described it as a “fantastic fight with Daniel all day.”

Unlike in round seven where Price had a few tumbles, he managed to keep the bike up right but came into a few close encounters with a handful of trees.

“To finish second yesterday and today is ok really, it’s good points towards the championship which is the main thing.” said Price.

“I just had a few close calls with a few trees and went ‘bush’ a few to many times, when everyone is going flat out and this fast you can’t afford to be doing that sort of stuff.”

Prices’ best time came in the second heat when he nailed down a 7 minutes 7.783 seconds.

Husqvarna’s Glenn Kearney continued his solid year by finishing third overall and claiming the win in the E3 class, which marks his seventh win of the season.

Throughout the whole day Kearney and Josh Green (Active8 Yamaha Yamalube) had their own private hit out which came down to the last test of the day and saw Kearney winning in the end by 1.176 seconds.

“I really enjoyed the rough track today out the back, but it took me most of the day to come to grips with the tight pine track.

“’Greeny’ and I battled all day backwards and forwards and it came down to the last test when there was just half a second between us.

“It’s been a great weekend, good points again, and came out of the weekend unscathed, big thanks to the Husqvarna team who worked well all weekend to.”

Green was fourth overall and picked up another third place in the E2 class that sees him three points adrift to Price in the E2 championship.

Just like many other riders, Green found the track tough going and very wild! “The track was good, but hard” said Green who now turns his attention to next weekend’s Tri-Series in Western Australia.

Green has admitted however he was off the pace to the front running guys so it’s something he will have to work on but still very happy overall with his weekend.

CDR-Yamaha rider, Chris Hollis, rounded out the top five in the outright championship and finished fourth in the E2 division.

Hollis pin-pointed his weakness at the moment as just being too slow to kick things off with. “I got faster as I went on, but obviously it’s not good enough to be where I should be.” explained Hollis.

“I’m happy with how I rode, but I just need to work on a few things” added the 2011 champion who now sits with 147-points to his name in the outright championship.

Sanders was also victorious in the Transmoto 19 & Under class making it a staggering eight of eight wins on the trot which basically gives Sanders one hand on the championship.

Tayla Jones put a stop to Jess Gardiner’s winning streak in the Women’s championship when she won with a total tome 1:06:29.485, 27.128 seconds faster than Gardiner.

“Today was a lot better compared to yesterday.” said Jones.

“I liked these tracks better as it was more flowing and sandy which suits my riding style more.”

Gardiner later said after the race “I struggled a bit out there today, It was a really fast track out there we had today and that is where Tayla shines.

“She kept me honest out there that’s for sure, I’m still happy to come home with a second and continue to lead the championship, I just can’t wait for the next round!”

Gardiner still holds on to a 16 point lead in the title fight heading into Kyogle next month.

Emelie Karlsson and Sophie Coldiutt where once again third and fourth respectfully with Bronwyn Aplin rounding out the top five.

It was another clear win from Trent Lean in the Masters class, beating Ian Jenner and local lad Adrian Fitzgerald.

The Veterans class was an exact replica of round seven with Damien Smith winning from Rowan Pumpa and Kirk Hutton.

Ben Kearns took out the J3, and William Price got the upper hand on Joshua Brierley and his brother Mitch in the J2.

The first Victorian rider home in the J2 class was Daniel Simpson in fourth place ahead of Queenslander Lachlan Allan.

The series will now head 1,922km from Coonawarra to Kyogle in New South Wales on July 19-20.