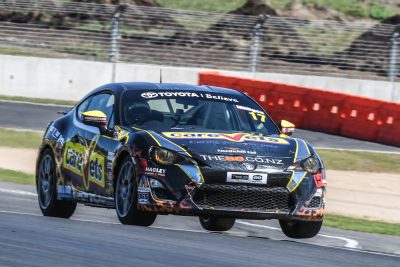 Christchurch driver Jack Milligan has run fastest in today’s practice sessions for the final round of the 2017-2018 Toyota 86 Championship at Hampton Downs in the northern Waikato.

Throughout the three practice sessions Milligan swapped times with arch rival Tom Alexander as he has for most of this season, but his 1:15.754 set in cool air this morning stands as the fastest TR86 lap of the day. Former Cantabrian Alexander posted a 1:15.813 in the same session, with another Christchurch driver, Jaden Ransley, third on 1:15.927.

“I’ll take that, it’s good to get the speed right here and I’m pleased with our progress,” he said afterward.

“I’m focused on our car and making it the best weapon it can be, so I’ll leave other people to their own battles,” he said.

Like Milligan, Alexander says he is focused on getting his car’s set-up right for the coming races and won’t be drawn into ‘head games’ by other competitors.

Michael Scott, second in the championship, struggled all day with understeer which his crew were unable to completely tune out of his car. Major changes to set-up brought the car briefly as high as fifth fastest in the last of three sessions but he dropped to eighth as others went quicker.

Only three drivers – Milligan, Alexander and Jaden Ransley – managed to break into the 1:15 second bracket in the first session. No drivers managed to lap under 1:16 as track temperatures rose for the noon and afternoon sessions.